In November 1936, the New English Weekly published George Orwell's essay In Defence of the Novel. Orwell felt that the prestige of the novel was in peril, in part due to a systematic failure in the reviewing process. This essay will soon be 75 years old, but many of the critical points made in the piece are still eerily relevant. By examining In Defence of the Novel, it is possible to draw parallels between the imperfect system observed by Orwell and the lack of public trust in contemporary videogame reviews. 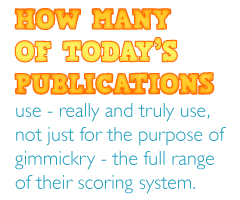 Orwell opens his argument with a declaration that the majority of novels are over-hyped. In penning too many ecstatic articles, novel reviewers have confused and alienated their readership: "When all novels are thrust upon you as words of genius, it is quite natural to assume that all of them are tripe." This problem, Orwell feels, is compounded by the volume of books being published and reviewed.

The affliction is rife in videogame reviews. How many of today's publications use - really and truly use, not just for the purpose of gimmickry - the full range of their scoring system, beyond the numbers 6 to 10 (or equivalent)? The top-heavy ratings scale is widespread in games publications, bestowing an artificial sense of importance on many titles that scarcely deserve it. This practice has created the unwelcome side effect of squeezing ratings into an increasingly narrow band, to the point where 6 out of 10 is, absurdly, now considered a poor score. As a result, distinctly average games will regularly receive 7s and higher: "There is no way out of it when you have once committed the initial sin of pretending that a bad book is a good one."

In part, this can be explained by the baffling trend of rewarding games for their mere functionality. Even in this patch-heavy era, it's rare for a game to simply not work or crash every two seconds (outside of weird PC hardware conflicts), which for a lot of reviewers seems to be enough to earn a title at least five out of a potential ten points. That's rather like awarding 50 percent to someone for writing their name correctly on an exam. Inexperienced reviewers often seem unable to point to anything beyond technical errors as reasons for why a game might not be any good; and while it's wise to admonish games for bugs, it's quite another thing to actively reward titles just for working properly. Poor design choices, weak narrative or the lack of a coherent art direction (something entirely different from "bad graphics") are far more important factors in judging a game, but only in extreme cases do failings in these areas seem to affect scores in any major way.

When Kieron Gillen rightly pointed out that F.E.A.R. 2 was little other than competent, several of the subsequent reader comments expressed dismay. A culture of giving uninspiring but functional titles at least 7/10 had made his award of a 5/10 appear somehow shocking. Gillen's review made it clear that he found the game about as average as it's possible to be, and his score reflected this. But multiple readers still felt that "his review sounds like he's going to give it a 7." Perhaps it did - but only in the kind of reviewing malaise where scores are inflated beyond the point of all reason.