Down And Out In Paris And GTA: London

24/7 videogame news coverage also plays a role in the unmerited, upward trend in ratings. Reviewers are games players too, and are often invested in a game that they've been covering and coveting throughout its development. Empire: Total War, for example, was a rather soulless, bug-ridden release by the series' standards, but has a Metacritic score of 90 and a host of gushing reviews. Conspiracy theorists may wish to insinuate a succession of brown envelopes from the publisher, yet it seems highly unlikely that every single reviewer was paid off or leaned upon. A far more rational explanation is that the games journalists involved were eager to play the latest title from a popular series and pretty much willed themselves into giving it a great (and inflated) score. 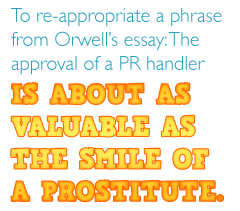 The ever-popular specter of publisher interference is, however, raised by Orwell in In Defence of the Novel and should still be treated seriously. He states that "novel reviewing has sunk to its present depth largely because every reviewer has some publisher or publishers twisting his tail by proxy." Orwell's summary is exactly the same one applied to games reviews today; publishers advertise in the periodicals which review the books, and if the books do not get adequate reviews, the publisher will threaten to withdraw advertising and place the publication in financial peril. Crucially though, this ruse is not explicitly spelled out by any party, or the result of dodgy backroom deals: "The various parties to the swindle are not consciously acting together, and they have been forced into their present position partly against their will."

Blatant corruption has certainly soured games journalism before, as in the case of the shameful Driver 3 scandal and subsequent cover-up - for which those responsible (publishers and editors) should have lost their jobs. But as Orwell notes in his essay, the influence of publishers and public relations upon games journalists tends to be more subtle than the high-profile, but rare, dodgy dealings most people assume. Rather than direct threats, publishers favor "gentle" pressure of the type highlighted by Zoo Weekly writer Toby McCasker that resulted in his firing. Zoo editor Paul Merrill later claimed that the article in question was not going to be a review, and stated that McCasker was fired for making the email public. Rather than stand by his writer, Merrill decided to remove him for the crime of releasing information that would help readers make an objective assessment about the nature of coverage within the magazine.

The nature of the job means that game journalists have to interact with public relations representatives on a daily basis. Incessant, insidious pressure from people whose specific roles are to push a title, stage-manage press events and give journalists freebies will inevitably take a toll. Alarmingly, in the aftermath of the Toby McCasker incident, a number of journalists posting on the Games Press industry forum saw nothing wrong with the actions of Rockstar's PR representatives. Though there was no consensus among the posters, sentiments such as "The PR guy was just trying to get the best coverage that they could" were not uncommon. That some games journalists have accepted PR influence as (at best) inevitable and (at worst) welcome, is deeply troubling for the games media and for its consumers. To re-appropriate a phrase from Orwell's essay: The approval of a PR handler is about as valuable as the smile of a prostitute.