In Defense of the Novel proposes two possible solutions to the 1936 reviewing slump. First, "It ought to be possible to devise a system, perhaps quite a rigid one, of grading novels into classes A, B, C and so forth, so that whether a reviewer praised or damned a book, you would at least know how seriously he meant it to be taken ... Raffles is a good book, and so is The Island of Dr Moreau, and so is La Chartreuse de Parme, and so is Macbeth; but they are 'good' at very different levels." Here, Orwell appears to be suggesting a multi-tier grading system whereby a title would first be assigned a category and then given a regular score. In some respects this already occurs in videogame reviews, with genres taking the place of "A, B and C." There's an unspoken acceptance among readers that a 9/10 hardcore strategy game is not the same as a 9/10 driving title, or a 9/10 indie platformer, but this approach has not yet pricked the balloon of inflated games scores. 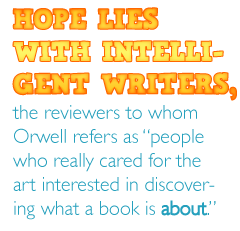 Orwell's other suggestion is the creation of a new, specialist publication which would develop a reputation for reviews and reviewers that can be taken seriously. Orwell stipulates that "it would have to be an obscure paper, for the publishers would not advertise in it." Unfortunately, he does not address how such a publication would secure funding and this leaves our situation looking rather bleak. Games reviewing is unlikely to see a publication free of advertising, nor a change in videogame scoring/rating systems (or, alas, their total abolition) in the foreseeable future. Publisher/PR influence is as strong as ever.

Hope lies with intelligent writers, the reviewers to whom Orwell refers as "people who really cared for the art of the novel ... people interested in technique and still more interested in discovering what a book is about." We're unlikely to ever again see a gaming collective with ideals as just and righteous as Amiga Power: "We loved good games, regardless of their advertising budgets. We loved Vulcan and software publishers like them, for being intelligent enough to accept legitimate criticism, even the most severe." There are, however, still enough robust individuals upholding these values to keep insightful games reviewing alive. Everyone reading this article will hopefully be able to name some favorites, and their continued work keeps gaming discourse above the level of advertorial guff.

Orwell's concerns for the reviewing process are as relevant today as they ever were, yet the very fact that the novel still exists and is the subject of fine writing almost 75 years after the publication of In Defence of the Novel shows that all is not lost. As Orwell himself concludes, "For just as the Lord promised that he would not destroy Sodom if ten righteous men could be found there, so the novel will not be utterly despised while it is known that somewhere or other there is even a handful of novel reviewers with no straws in their hair."