I go to Google, and I say, "Hey, Google. What's up, buddy? Can you tell me if Lord of the Rings Online is worth playing?"

And Google, in its robot voice that I'm making up, says, IN POINT ZERO THREE SECONDS I DELIVER TRUTH UNTO YOUR EYEBALLS, which actually takes Google like, five seconds to say. Silly Google. It also adds: I'M NOT YOUR BUDDY, BUDDY. Which I feel was a bit rude, but oh well. 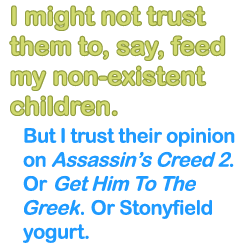 In response to my query, Google gives me 792,000 search results.

If I instead decide to go with the more sparely phrased, "Lord of the Rings Online review," I get 1,060,000 search results.

It's staggering. Also, dizzying. Just conceiving of that much information makes my eyes glaze over. It's like trying to imagine every mosquito, or counting every mote of pollen in the air. It's an impossible task to even consider. All that knowledge. All that wisdom. So much blur, fog, haze. I need a nap just thinking about it.

Instead, I turn to what I call "Human Google." I have plugged myself into the hive mind, and when I need information, I first look to see what the other bees are doing. Bees in my hive. Not your hive.

I have the Twitterstream. I have the Faceyplace. I have a blog. I have a Tumbled Log. (That's what all you cool kids are calling this stuff, right? This Members Only jacket is pretty stylish, too, you ask me.)

At the time of this writing, I have 900+ Twitter followers. Meager in the grand scheme, but still a robust enough number. I ask a question - like, "How is Lord of the Rings Online?" - and I get maybe 20 to 30 responses from different users (A.K.A. my "tweeps").

I can go to Facebook, too. Same result. Twenty. Maybe 30.

I trust them because I've already measured their thoughts. I've read their blogs. I'm privy to many of their Twitter feeds, too. I know what they like. I know how to gauge their interests against my own. It's simple enough to weigh accordingly. And by the end of it all, I know whether or not I should pick up whatever it is I'm asking about.