Hell, half the time I don't even need to ask. Opening weekend for a movie? New comic book day? Hot new game hits shelves? The opinions come in, unsolicited. I follow gamers. I follow pop culture vultures just like myself. It's not long before the word of mouth runs fast up the flagpole, popping into TweetDeck like little red or white flags - "buy this, avoid that, meh, awesome, shitty, fail, win," and so forth.

It's all about filter. 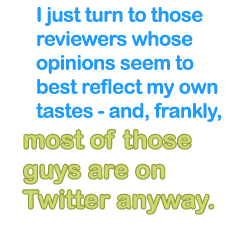 Twitter, and other forms of social media, are capable of acting as an excellent filter. A personal filter, in fact. We are defining an online version of the word of mouth phenomenon. Further, we're helping to define the quality of the content that reaches us.

Google offers us an unregulated, unmitigated blob of potential. Not a bad thing in and of itself, but it is a result born purely of quantity and only programmatically of quality.

And it's slow. When a new game hits the shelves, I don't have to wait for Google to populate its search results. I don't want to watch the mythical Google robot do its lumbering dance. I want to know now. Do I go buy it today? Do I wait? Do I wave it off and kiss that thought goodbye?

Twitter, Facebook, and whatever social media outlet replaces them in five years (or five minutes) are like stock tickers accounting the ebb-and-flow of pop culture possibility.

Does this drive Google toward obsolescence? Does it turn the efforts of critics and reviews into meaningless drivel? Hardly. Just as the scalpel does not invalidate the need for a hatchet, social media does not magically undo the benefits of search engines or human reviewers.

But what it does do is give me more options. Better options. I don't have to go looking for a major review consensus now. I just turn to those reviewers whose opinions seem to best reflect my own tastes - and, frankly, most of those guys are on Twitter anyway, so now they're part of my hive mind and have merged into the weave and weft of Human Google.

For the record, I'm not going to bother with Lord of the Rings Online. That's not a mark against the quality of the game. Maybe it's great. But enough people warned me away from it - people I trust, people with whom I'm comfortable. I've got other fish to fry. Other games are competing for my time and attention.

A couple hours after my first tweeted query, this comment came in:

"I agree, WoW is good at rewards, but that isn't how the LOTR stories were told. Boromir didn't kill bears for +2% pants." (jachilli)

The Human Google hive mind. It's not only useful, but dangit if it ain't funny, too.

Chuck Wendig is a novelist, screenwriter, and freelance penmonkey. He's written for the pen-and-paper RPG industry for over 10 years, and is the developer for Hunter: The Vigil. He is represented by Stacia Decker of the Donald Maass Literary Agency. His website and blog is Terribleminds.