The search for a different voice for videogame journalism, for something other than a simple product review, has continued to evolve and found itself inextricably linked to the explosion in New Media. 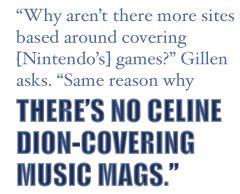 "While the monoliths of IGN, Gamespot, et al remain, there's now more sites with an obviously different character," Gillen says. "Some I hate. Some I love. But the point being, I get the choice of what to hate and love. No matter who you are, no matter what you care about games, there's probably a site mirroring your interests. That's progress." This is vital not only to gaming journalism but fiction, music, mainstream journalism and academia; New Media enables countless new people to talk about their perspective on the games that they are playing.

It's not been a universal process though, as Gillen notes. ''The Americans caught up with the British-standard of personality-lead games-journalism, via their mastery of podcast culture (Frankly, the yanks do it much better than we ever have)," Gillen says. "Smart writers/commentators embraced the new technology - Yahtzee is the obvious example, but there's a load around him." The conversations that we have about games have become almost as common as the games themselves and, thanks to the universal nature of podcasting, it's a conversation anyone with an mp3 player can join.

However, progress comes with a price and podcast and web-based journalism needs financial support as much as print journalism. But how do you balance the freedom of writing for your own site with the need to make enough money to keep it going? This is a problem Gillen's had to face head on at Rock Paper Shotgun, the gaming site that he co-edits:

"We do a hybrid subscriber/ads model. And entirely believe that if you're interested in impressions, you'd do better in the long-run engendering trust and having people hang around rather than just publishing every clearly-untrue rumor about the latest game. But the only way we get away with that is because the bosses are ourselves and we're editorial folks. If your boss is from an ads background, they will never understand this."

Beyond monetary issues, there are trends in the industry which run counter to Gillen's ideology. The rise of sites like Metacritic seem to embrace the technical review model that NGJ was so dead set against. Gillen doesn't blast Metacritic like one would expect, however.

"It's inevitable," he says when I asked his opinion of the review agglomerate. "It's also one of the ways which 'the games press' better serves its consumers. Some people are just interested in the mark. Metacritic is the site for them." To Gillen, everyone's opinion is valid, whether you want to talk about emotional engagement or collision detection. New Games Journalism is all about the individual viewpoint; Metacritic serves to present those opinions in aggregate.

The industry has certainly undergone seismic change across the last six years since NGJ, much of which has pushed it finally into the mainstream. That movement is embodied in the colossal success of the Wii and motion controlled games, something which has opened videogaming up to the holy grail of customers: people who don't play games. But the Wii didn't spark a similar popularity in videogame journalism.