The ongoing expansion and newfound acceptance of gaming has had several interesting side effects, not the least of which is the return to prominence of the huge tradeshow that is E3 2010, something that Gillen welcomes. "For the U.S. to not have a major, stupid trade show makes the industry smaller," he says. "That the U.S. couldn't support a show like that ... Well, that didn't say much for the state of the industry." 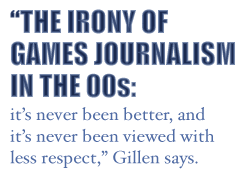 What about the culture's reliance on New Games Journalism? Does the manifesto still hold up? "As well as it ever does. It's a device in the writer's toolbox. It's a question of whether you use it well or badly," he says. It's clear that people do still use it, as Gillen not only finds people crediting it with influencing their style but also sees its influence in subtler ways. "[The ideas in NGJ] are still there in the cultural soup. People who grew up seeing people do this sort of thing just take it as a natural thing that they can do it too."

"They can do it too." That's the crux of the matter, the simple DIY attitude that lies at the center of NGJ, modern videogames and Gillen's own fascination with story and narrative, something which has led him from game journalism into comic book writing (including an acclaimed run on Marvel Comics' Thor and the glorious, but short lived, SWORD). Your opinion, your path through a story is as valid and as vital as anyone else's. NGJ empowers both the medium and the player, which, six years on from calling on us all to be "Travel Journalists to Imaginary places," still lies at the center of Gillen's career.

In the end, the problem with writing about imaginary places is that no one ever experiences them the same way. Twenty three years ago, I flew a helicopter gunship over a wire frame landscape and felt like the king of the world, whereas other players would see nothing but overly complex controls and blocky graphics. The player changes and the game changes to reflect that, meaning that no one experience is ever the same, no one sunset is ever quite the same as the last and it remains easy to write about the game but very difficult to write about how the game makes you feel without sounding over indulgent.

Six years after it was written, the New Games Journalism may not be the new standard, but it's certainly given the industry an alternate way to chart those imaginary places. As an essay, NGJ is as fascinating as it is flawed, offering us a different perspective but challenging us to do something with that difference. Here in 2010, there's still work to be done. "The irony of games journalism in the 00s: it's never been better, and it's never been viewed with less respect," Gillen says. The good news is right there in the first lines of the New Games Journalism, in a statement that combines a gleefully obtuse music reference with wide-eyed, determined optimism, "As Kate Bush's Cloudbusting is currently informing me, just saying it could even make it happen.''

So go and play a game, and then say something about your experience. People are ready to listen.

Alasdair Stuart is the editor of Hub magazine and hosts Pseudopod, the Parsec award-winning podcast. His first gaming experience was Chuckie Egg 2 on the Spectrum and one day he will find that game again and conquer it ALL...

I've Got to be a Macho Man Kieron Gillen 47 Comments