How did you finally get the job at The Escapist? - Asked by dex-dex 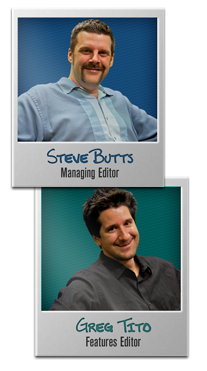 Steve Butts, Managing Editor: I had been working fulltime for IGN for eleven years, first in the San Francisco office and then from my home in North Carolina. Earlier this year IGN asked me to move back to San Francisco and I declined. Not sure what I wanted to do next, I called some of my contacts here in North Carolina and asked them to keep an eye out for any new opportunities. As luck would have it, one of the people I reached out to asked if I'd moderate a marketing panel at the upcoming Triangle Games Conference. It was a great opportunity to get my face out there and meet some of the local folks, so I jumped at the chance. That night, the speakers and exhibitors were all invited to a party where I happened to meet with The Escapist's publisher, Alex Macris. He'd heard I was looking for a new job, so we grabbed a conference room and chatted about working together. At one point, he called me an "older guy." Since we are nearly the same age, I let it slide.

I met with Editor-in-Chief Russ Pitts a few times over the next month or so to discuss our own editorial philosophies and some of the company's processes. The Escapist needed a Managing Editor to run the day-to-day operations of the editorial department, and we both thought I'd be a good fit for that job. I had a few more meetings with the editorial team and the directors of the other departments. After a few more interviews, Russ rode down the elevator with me and offered me the job. A few weeks later, I found myself walking into the building as a brand new employee with a sack of tuna fish sandwiches and my Dr. Strange action figure.

Why did you choose to be based out of NC when there were so many other options? Brooklyn, Manhattan, Bronx, Staten, Queens, Washington, etc. All valid choices, yet you choose North Carolina. Explain.

Alex Macris, Publisher and CEO (Archon): Raleigh-Durham, North Carolina has been cited as the country's #1 Boom Town, and one of the best places to live. It is also one of the country's leading hubs for videogames. Epic Games, Red Storm, Insomniac, Atomic, EA Sports, Vicious Cycle, Emergent Game Technologies, and about 30 other companies are all located here. Additionally, our sister city Chapel Hill, NC, has one of the country's leading journalism schools, and nearby Wilmington, NC, is the East Coast hub for film and movies; it's called "Hollywood East." When you factor in the warm climate and low cost of living, the area is actually just about perfect for The Escapist.

Well, this may be the stalker in me talking, but I would like to know more about the reviewers and the contributors personal life, like who's married and such.

Steve Butts, Managing Editor: A stalker! It's about time you showed up. I've been married for 13 years and have two children. I'm an avid reader, a student of ancient history and a part time musician. I moved to San Francisco to break into the gaming industry and got there just in time for the dotcom crash. After climbing through the ranks at a large game publication, I came back to North Carolina to be closer to my family and find a house that didn't cost a million dollars.

Greg Tito, Features Editor: I've been married to a beautiful girl for 6.5 years. We met in college while both working on the same play; I was the lowly stage manager and she was the star. As for other stuff, I love to read fantasy and other spec-fic books, but my reading time has been cut down since moving away from NYC. You never know how much you miss reading on the subway until you realize that you've been reading the same book for four months. Of course, it is Anathem by Neal Stephenson, so I have the excuse that it's pretty dense.

Made By People! Archon 20 Comments

Letters to the Editor: Once Upon a Time The Escapist Staff 1 Comment