Critical analysis of interactive entertainment has heretofore been the bailiwick of an elite caste of self-appointed ministers of quality who use faux-numerical quantitative data and false professions of objectivity to conceal their cultural and financial allegiance to a system of capitalist exploitation that transforms the creativity of artists into tools for the production and marketing of propo-tainment designed to advance the reactionary, violent, sexualized culture of masculine power fantasy. Zero Punctuation subverts this dominant hierarchy of interactive entertainment critique by deploying the homicidal and homophobic vocabulary of the dominant culture, in combination with unexpected imagery and profoundly effective mass media techniques, to create an environment in which a genuine critique of interactive entertainment can be exposed, free of the false econometrics of mainstream analysis. In so doing, it establishes a new cross-media ludological hermeneutic that promises to transform future critical analysis at a mass level. 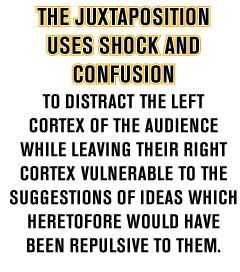 Here we explore the manifestation of the new hermeneutic in the context of Yahtzee Croshaw's review of Dragon Age: Origins. In this review, Yahtzee employs three primary rhetorical tools to deliver profound critiques to the mass market.

The first rhetorical approach is to deliver a controversial critique in a covert or opaque manner, and then slowly unfurl the underlying semiotic with increasingly overt statements. For instance, Yahtzee begins his review of Dragon Age by asking us to "take a step back and examine the basic workings we have come to accept, like saying the word 'Scunthorpe' over and over again until it's reduced to meaningless syllables." A thought-stopping technique thus convinces the audience to begin to say "cunt" over and over, while agreeing that this is a "meaningless syllable" - suggesting that to fantasy gamers like Yahtzee and the audience, the female sexual organ is meaningless, i.e. de-sexualized. A few minutes later, Yahtzee explains that "every individual element" of the game "could make your girlfriend legitimately call you a sad bastard," creating a sense of shame in the audience. Finally, to end the review, Yahtzee openly embraces the de-sexualization of fantasy gamers, saying "If you don't like fantasy RPGs, then I guess you can just go off and have sex with people instead." This rhetorical technique causes the audience to actually take pleasure in unpleasant truths that, had they been delivered straight up initially, would have been rejected out of hand.

The second rhetorical approach used in Zero Punctuation is the juxtaposition of imagery and audio to create a cognitive dissonance in the mind of the reader. The juxtaposition uses shock and confusion to distract the left cortex of the audience while leaving their right cortex vulnerable to the suggestions of ideas which heretofore would have been repulsive to them. For instance, he notes that "about 75 percent of your play time is spent making rather creepy loving eye contact with NPCs as they talk about the weather, the political situation," but combines this disarming humor with an image of characters on screen adorned with Nazi swastikas.