As the light fades and a teenage girl talks at her friend about her position on nanobot-assisted metabolism in the far future (and how, with her diet, she wouldn't need them), I realize that I missed my stop. The bus exchange at which I was supposed to get off, cleverly disguised as a disparate cluster of single-bench stops, passed by the window minutes ago. 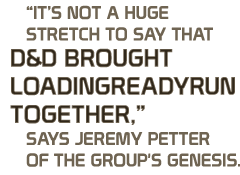 I'm in Victoria to get to know the people behind LoadingReadyRun, a sketch comedy group that has most recently found a venue here on The Escapist. After a cursory phone call explaining my propensity for instantly getting lost in any new locale, Graham Stark and Kathleen De Vere pick me up from under the red neon glow of a closing Boston Pizza.

Graham, Kathleen and Alex Steacy (a frequent actor and on-set crew member for LRR) are letting me occupy a spare room in a charming old house they've been calling home until Graham's parents sell their old heritage house. The quaint neighborhood and facade of the house belie that this is a house furnished by the internet. Iconic pictures of cute web-things and robots line the walls. A model of "that-chainsaw-maniac-from-Resident Evil 4" presides over a collection of figures in a wall-mounted display rack.

They relate to me the history of LRR over a game of Mario Galaxy and cake (which everyone eats too much of without regret). I'm surprised to learn that they've been making videos since 2003, seven years in reality and roughly since the late Cretaceous period in internet time. LRR was around before YouTube. Let that sink in. They may have been producing content for The Escapist since 2009, but they are most certainly not the new kids on the block.

Most of the LRR crew have been friends since high school - Graham and Paul Saunders, the group's founders, since elementary school. It's also accepted that Dungeons & Dragons played a large part in their conception, and perhaps helps explain how a group that primarily identify as gamers came to stand in front of cameras for all the internet to see. "It's not a huge stretch to say that D&D brought LoadingReadyRun together," says Jeremy Petter of the group's genesis.

Graham and Paul entered The 2009 Escapist Film Festival and, after an exhausting production period, created the first video in the series that would become Unskippable - a Mystery Science Theatre dub-over of the opening cutscene for Lost Planet. Thinking it nothing special and being unhappy with the end product, they stopped short of entering the video. Luckily, Graham went ahead and submitted it anyway, encouraged by the infallible logic of Kathleen who said, "Well, it's done. What's the worst that can happen?" With the video in the hands of The Escapist, the pressure was off and they forgot about it. Later that week, they got an email asking them to sign on with the site, and production of Unskippable went into full tilt immediately.

Before LoadingReadyRun, Graham worked in data entry at ICBC, a provincial auto insurance company. "Imagine opening a letter addressed to 'Crooks and Assholes,' reading a check with 'paying for government's lunch break' written in the memo field, and then having to phone that person because they underpaid," he says about the experience. Graham did not renew his contract.

Following the success of Unskippable, The Escapist EIC initiated talks with LRR to develop a fake news program, which became ENN. The move of the "official" LRR sketches to The Escapist followed shortly thereafter. Jeremy, Kathleen, Paul and Graham are the primary writers, but everyone is free to take a shot at writing a sketch.