Forget Albert Wesker. Forget Saren. Forget Shang Tsung and the entire Sith lord chorus-line. In number of kills, blood-boiling frustration caused and sheer uncompromising evil, none of these villains can even touch on the world's most powerful badass: 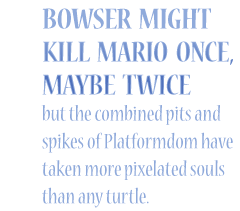 Men are mortal. Monsters have weaknesses. Kratos proved that even gods can be brought to heel with quick enough thumbs. But the environment, as any platform gamer can attest, is vindictive, cunning and distressingly undying. And the reach of this hate-filled virtual geography doesn't end there.

There isn't a game that doesn't use the world to mess with its players in some way. This isn't to say that the next time you play Halo that you'd do well to save half your ammo for the foliage, but rather that it's the way that the game is presented and the physical area in which your gun-toting bicep-rack is standing that determines how difficult you find the shoot-out between yourself and the horde of zombies, hell-spawn or Germans. In almost every FPS, the challenge isn't in how many enemies you face, but from where those enemies appear, and what cunning scrap of cover you can find to shield your porcelain tuchus from near-certain shattering. Sure, maybe it's still the hulking six-foot monstrosity that gets your underwear as a trophy, but it's the level design that gives him the opportunity. Find yourself a neat little corner to hide away, a single doorway to aim at and a slow, sauntering procession of baddies and any game will cease to be difficult. Amusing, yes. Tough, no.

The same can be said for any game, in any genre. Bowser might kill Mario once, maybe twice if you weren't paying attention, but the combined pits and spikes of Platformdom have taken more pixelated souls than any turtle. Be it the free-running time-trials of the Prince of Persia and Assassin's Creed series (infinitely more challenging than their eyes-closed slap-fest combat systems), Braid's fatally ambiguous backgrounds, or the peculiarly heavy oncoming 3AM traffic in Need For Speed's drag races - wherever you go as a gamer, the Environment is waiting, with a heavy stick and a copy of A Clockwork Orange for inspiration.

There are games where The Bad Guy is hardly more than a necessary but weak plot-point, acting as the final obstacle between you and the light at the end of the tunnel. A tunnel which, it's safe to say, has challenged you (and succeeded) far more often than any single end-level boss fight. Silent Hill epitomizes the idea of Environment-as-Bastard by scaring the pants off of you not through a conga line of painfully slow-to-die monsters, but through its atmosphere. A poorly played piano, punctuated with the silence that makes your ears ring; blood in places blood should probably never be found - in games like this the environment is, let's not mince words, designed to fuck with you. Take the school scene, for example. After a faint crackle at your radio, signalling the presence of something otherworldly near you, the ghost of a little girl appears out of nowhere.

Science and Tech: WTF Science?! Can You Guess What These Strange Pics Are? Fanghawk 4 Comments
Comments on