Aside from showing everyone nearby the true extent of your high-pitched masculinity, this also causes you to empty an entire clip into thin air, leaving you with only a torch and a moist inner thigh to defend yourself for the next hour. You are encouraged to waste ammo, to think that every locker you pass will explode in a flurry of near-hysterical ineffectual flailing. If any game can show the world in which you are acting as being more an antagonist than the monsters you are fighting, it is Silent Hill. That and Peggle. And yet, it is the environment that makes us want to play the game in the first place. It provides the scenery, the ambiance, the immersion that draws us in like any combination of two X-chromosomes to a sailor on shore-leave - let's face it, it is beautiful. And yet so cruel a lover. 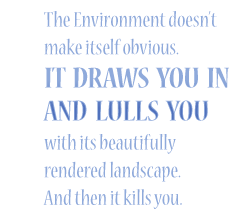 But isn't that the very reason we love it? Humans love good looks. Humans love a bit of a challenge. Putting the two together is the alchemical formula for turning an idea into other people's money. Let's face it; the Gears of War franchise isn't successful because of the deeply moving narrative. It's difficult and it's pretty, in a butch, chest-bumping, grunty sort of way. Now, we could ask why we do this to ourselves - why we are so attracted to challenges - but that is a question for game theorists and philosophers.

A more interesting question is: Are these challenges intentional? Architecture is guided by the desire to use space as effectively as possible. Was something similar running through the heads of the malicious bastards who designed the Locusts-on-Horseback scene in Gears of War 2, or was it just my own inability to distinguish between mushy brown monster, mushy brown monster's pet and mushy brown rock walls that made me want to fling my console into a black hole, where it would be crushed and entombed forever? Anyone familiar with Tekken 4 will remember fondly how being knocked into a wall would cause you to lose control of your character briefly, leaving you vulnerable and pinning you to the edge of the screen while your opponent riddled you with fist-to-stomach introductions. And once you'd dislodged the controller from his ear canal, you couldn't help but wonder if this was a pristine example of unadulterated level design genius, or if it was just a glitch? Was it intentional, or a bug, heavily salted with moronic design choices, proving that programmers really do just hate us all?

Now, I'm not including the thousand examples of the camera being more interested in the local flora than the reason for your rapidly unravelling intestinal tract, or even a button setup more inhuman than Sudoku enthusiasts. There are a number of ways in which designers can dick about with players, but gameplay mechanics and the virtual environment are two wholly different factions. Sure, perhaps they share a table at the Things That Make People Want To Kill Themselves awards, next to Stephenie Meyer and the vuvuzela, but unlike gameplay mechanics, the Environment doesn't make itself obvious. It draws you in and lulls you with its beautifully rendered landscape. And then it kills you. Which is what makes it so difficult to judge whether it was intentional or not, and what makes it so bloody frustrating to die while merely traversing the environment.