Game developers should use the malicious power of the coded landscape as beautifully in single player games as they have in multiplayer. There is nothing more fulfilling, for example, than flinging a World of Warcraft enemy off the side of a mountain, or rocket-prodding your Unreal Tournament opponent into the vast and terminal openness of space. And who can forget the sheer elegance of a perfectly-timed Quake 3 tele-frag, where two players come out of the same teleporter in true Highlander "There Can Be Only One" style, except with more exploding? 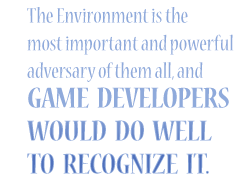 Admittedly, none of these are as exhilarating as they sound when you're on the receiving end, but the pure joy they provide when you are the perpetrator is well worth the wait, due entirely to the simple fact that you're playing the game indirectly. By doing what the game requires you to do without using any of the tools it's given you for the job, gameplay takes on a whole new spin of strategic originality. Even if it's as simple as using the still-warm bodies of other players (and sometimes your own) for cover in Call of Duty, turning the partly aesthetic, wholly malevolent landscape to your advantage is fun. Hacking away with mouse clicks can offer only so much pride and admiration; grinding a level 80 Paladin into dust with nothing more than Typhoon and a 300 foot drop, however ... that is infinitely more rewarding. In this way, the environment is an open ally, offering its services to whichever player knows how best to use the higher ground.

This murderous creativity hasn't managed to find its way into the realm of the single-player, however, and probably never will. While the inability to spot a twitching sniper rifle sticking through the body of a dead teammate is an example of fundamental human daftness, AI has a different and altogether thicker stupidity that means this graceful way of beating your opponents (or at the very least getting them to do that themselves) in single-player will require the kind of omnipotent AI programming that will eventually birth Skynet. Exploding barrels; gravity-gun-propelled debris - these might seem like examples of the player-controlled destructive landscaping that I'm going for, where the player can turn the environment's threats to his advantage, but they are really little more than pieces of opportunistic slaughter. Even something as small as luring enemy soldiers into the path of their own mortars, or Diablo III's destructive and destructible scenery is a step in the right direction.

In games, as in life and any good story, the Environment (physical or situational) is the most important and powerful adversary
of them all, and game developers would do well to recognize it. I'm not suggesting that they cater for every roundabout way of finishing a game, or even a few dozen new ways of killing the assorted monsters of the virtual world, but a handful of creative ideas to allow players to use the environment would be nice. Or at least provide the AI a few more interesting ways to kill us. Because the fact remains, from its pleasant cel-shaded geography, right down to its wire-frame core, it's a hate-filled world that your characters inhabit. And honestly, that's the best kind.

Kevin Hoole is raising funds to start VirtualGreenpeace. Donations can be sent to him through entirelyunrelated.blogspot.com