Imagine a game without a final boss. Not just a strategy game or a social game or something that usually doesn't have a boss. I'm talking about a game which has combat, a fictional story, and doesn't include a climactic battle with an archvillain. I'm talking Mario without Bowser, Zelda without Ganon, Final Fantasy without an evil mind-controlling, genetically engineered, time-traveling sorceress/alien from another dimension, Half-Life without that weird giant mouth thing, or Castlevania without Dracula. I'm talking about a game where the designers had the opportunity to portray an act of violence against a villain at the end of their game, and deliberately chose a different approach. I'm talking about Ultima IV and VI, and not much else. 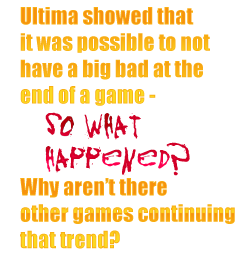 These days, it's pretty much unthinkable to have a story-based game with combat that doesn't include a big boss at the end. Back in those days, 1985 and 1990, respectively, it was extremely rare as well. The first three Ultima games included a normal batch of big bosses: an evil wizard, an evil witch, and their spawn, a demonic inhuman named Exodus. Other RPGs and action games of the era all included final confrontations with supervillains like Metroid's Mother Brain or Wizardry's Werdna. Ultima III gave some indication of the series' future by making Exodus unkillable in combat, only defeatable through puzzle-solving, but regardless, your success in the game was still based on a final act of violence.

It may have been rare in the 1980s, but it wasn't unthinkable. "Scorpia," Computer Gaming World's queen of RPGs, coined the semi-derogatory term "Foozle" to refer to the big boss of roleplaying games. Games with simplistic plots were derided as "Kill-the-Foozle" quests. Yet these days, Kill-the-Foozle is the default.

What does that say about games, or worse, what does it say about gamers? The immediate reaction - that maybe having a strong villain makes for better games - doesn't fly given that the Ultima series in general, and these two incarnations of it in particular, are amongst the greatest RPGs of all time. Ultima IV takes the entire concept of heroism in games and subverts it by asking the player to embody each of eight virtues (Justice, Honesty, etc.) as the "Avatar." While this could have been viewed as an academic exercise or a novelty, Ultima VI takes the no-Foozle concept and expands upon it to tell a fascinating story.

The kingdom of Britannia, the setting of the Ultima series, is being attacked by gargoyles from the underworld. In a more conventional game, you'd fight off a few attacks, run into an evil wizard or the like controlling the gargoyles, and then defeat his nefarious plot to destroy the world in a final battle. In Ultima VI, the Avatar learns his enemies' language, earns their trust, and concludes the game with a peace treaty. This narrative is musically embodied in the end of the game with a beautiful little tune that combines the main themes of both the humans and the gargoyles into a single song - no rocking boss music.

Ultima VI is a classic game with a strong narrative, built around conversation and exploration with as much combat as you desire. It ends not with victory through force of arms, but peace through understanding and diplomacy. Few games since these two Ultimas have allowed you alternative means to finish the story. Famously, it was possible to finish Fallout without firing a shot, but some mechanism was required to kill the villainous "Master" who served as its Foozle. Some games offer semi-puzzles during the Foozle fight - like destroying the machines which make the antagonist invincible, or shooting arrows into a mirror to bypass an enemy's defense - but they still feature a prominent Foozle. Ultima showed that it was possible to not have a big bad at the end of a game - so what happened? Why aren't there other games continuing that trend?