The worlds of sport and entertainment owe many debts to professional wrestling. Pro wrestling was never bound by the rules of athletics or fiction; it got to play on whatever stage felt right at the time, wherever the fun and the money was. Sure it all boils down to large men in strange costumes hugging each other but when has that stopped anyone? Promoters learned early on that the key to making their repetitive sideshows interesting was the story of heroes versus villains, the narrative wrapper that gave context and meaning to the action. Strong, simple stories let you access deep corners of the audience's psyche; pro wrestling's approach, especially the way that they construct villains or "heels," has influenced everything from the NFL to TV drama, and has particular relevance to videogames. 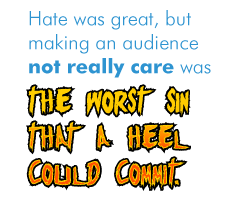 Professional wrestling evolved - and still thrives - in front of live audiences. In the older days, it wasn't so obviously scripted, and, in the late 1800s, it may have been an actual legitimate sport, at least some of the time. Whether the outcome was fixed or not, wrestlers needed to be able to hold a crowd and be more interesting than the other carnival attractions around them. Big personalities tended to dominate; a wrestler who could project a clear image and get a reaction (good or bad) from the audience was usually more successful. Subtlety was difficult to convey - audiences, equipment, and promotion strategies were all relatively unsophisticated, and the best approach was to play it as broadly as possible. Skillful performers knew how to tell simple stories in and out of the ring, stories where there was a good guy and a bad guy, an honorable man and a sneak, a hometown hero and a big-city bastard trying to cheat him.

A system of "faces" and "heels" (good guys and bad guys) evolved, with standard tropes and routines for each. A face heard the crowd cheer his actions in the ring; a heel was jeered at, spit on, and hated by a hall full of people who were paying for the privilege. The heel's job was to stoke the crowd's negative reaction - to be the guy that you love to loathe. 'Gorgeous' George Wagner was a pioneer of simple, effective ways to piss off a crowd, like having his personal valet spray the ring and sometimes the front row with "Chanel #10" disinfectant. The whole thing was a fundamentally Shakespearian setup; despite what you might think, the Bard wrote for big, mixed audiences, too, and knew the value of a memorable asshole.

Pro wrestling's theatrical underpinnings gave it a running start when TV emerged. The format was a natural fit for the small screen and it has been broadcast nationwide and since the 1950s. With drama, comedy, colorful characters and accessible storylines, it was hugely influential on the development of both "legitimate" sports broadcasting and TV soap operas. Legendary heels like Killer Kowalski, Crazy Luke Graham, and Buddy Rogers made big names and piles of cash in the new medium, and pretty much any gimmick was fair game as long as it worked. Hate was great, and if they loved to hate you, that was great too, but making an audience not really care was the worst sin that a heel could commit.

Being the '50s, there was a lot of race-baiting, North/South taunting, and parochialism in the heel repertoire. One sign of things to come was The Sheik (not the later Iron version), a guy named Ed Farhat from Michigan who wrestled as a psychotic Syrian. The Sheik would use illegal moves, cut his opponents, and even throw fireballs at them. He never spoke on camera but audiences loathed his low-down uncivilized foreignness - interestingly enough, earlier Sheik-type characters had usually been heroes, more in the mold of silent movie star Rudolph Valentino. The Sheik was a little more extreme, a little more exaggerated than most of his contemporaries; he and other heels paved the way for the 1980s, the abandoning of all pretense that pro wrestling wasn't scripted, and the rise of the human cartoon characters of the WWE.

Gallery of the Day: 8 Old School Wrestlers That Make You Weep With Nostalgia DrStrangelove 4 Comments
Comments on