There's a revolution happening in gaming. It's been happening so swiftly and so subtly you may not have noticed until now, when it's too late to do anything other than stare in open-mouthed wonder. You're not alone in this. Attending this year's Game Developer Conference revealed that, more and more, what's been on the mind of the people who run the industry is the possibility that they're not going to be running it for very long - unless they acknowledge the paradigm shift happening right under their noses - and adapt. 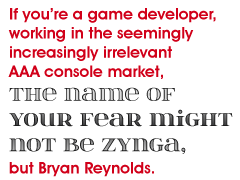 In session after session, the same key phrases were mentioned with equal parts wonder and fear. Sometimes they said social games, social networks or even Facebook, but what they really meant was Zynga.

Zynga, the three-year old company that now employs close to 1,000 game developers all over the world, and is the only company (or government entity) capable of influencing the will of Facebook, the social network juggernaut that, for more people than live in the entire United States of America, has come to define the internet. Why is Zynga such a monster? Because for that same number of people, Zynga has come to define games.

Through their massively-popular family of games (including Mafia Wars, FarmVille and FrontierVille), Zynga has, in just three years, come to dominate not only the single largest gaming platform in the universe, but by that measure, the game industry as a whole. Its little wonder the rest of the industry is lying awake at night, pondering the future. Name another single game, other than FarmVille, that had 80 million players at one point on a platform that reaches 500 million. (FrontierVille doesn't count, it only has 20 million players.)

If you're a game developer, though, working in the seemingly increasingly irrelevant AAA console market, or the desperately diminishing PC gaming market, or the slim-margined smart phone market, the name of your fear might not be Zynga, but Bryan Reynolds.

The name will sound familiar if you know your history of massively successful and addictive games. Reynolds is a 20 year veteran of the game industry, a co-founder of Firaxis and founder of Big Huge Games. Reynolds was a design lead on games like Civilization II, Sid Meier's Alpha Centauri and Rise of Nations. He worked on Civilization as a designer. The first one. And he was the creative genius behind the successful reboot of the popular board game Settlers of Catan on Xbox Live. These days he works for Zynga as their Chief Designer. He was the lead designer of FrontierVille.

"When I found out Zynga was looking for somebody like me, it turned out to be a great fit," Says Reynolds, of his transition from running Big Huge Games to making big, huge games on big, huge Facebook for big, huge Zynga.