An hour later (and hundreds of dollars gone), I felt like a man of excess: bloated with the mere potential of eternal amusement. Sure, I had to take out a second mortgage on the home. I had to max out the credit cards, steal some social security numbers and sell the taco terrier to a local preschool dogfighting ring. (My wife can't read this, right?) All worth it, right? My return to PC gaming would be problem-free, heralded with a multitude of pixels. And virgins. And virgin pixels. 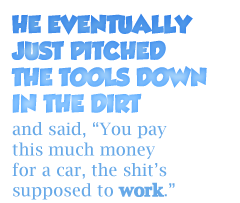 Fast-forward to the dozenth time that Crysis shit the bed and crashed my computer, and again I'm left asking why I invited this upon myself.

I'm left with something akin to post-masturbatory shame. Gloomy and simmering. Shame soon boils over to rage.

And now I want to punch a baby seal.

Once upon a time, it didn't bother me.

My first computer was a Tandy 1000 SX, and even back then, getting a game to run on your PC was an adventure. You had to jiggle the knobs, crack the case, get your hands dirty by dicking around with jumper switches and sound cards. Laying on my bedroom floor, surrounded by RAM chips and old graphic cards, I felt like I was learning something: The journey into the device felt intrepid and uncharted. Looking back, I was sure that my father probably felt the same thing when he was a teen tinkering with the carburetor of a 1950s Bel Air hardtop.

To get Ultima V running, or maybe King's Quest, you had to jump through hoops. But that was okay. It felt like a new frontier, traveling Out West to areas of the map once marked only with "Here There Be Dragons."

Except somewhere along the way, things changed. The journey Out West became less about the thrill of the Gold Rush and more about the part where the wagons break down and the food runs low and next thing you know you're eyeing up your buddy George and wondering what his backfat might taste like when simmered in an iron skillet.

I remember being a teen and having my car - a Pontiac Grand Am - break down because of something to do with the car's computer. (It broke down in the middle of my first driving test, which caused the course to close for the day, which earned me angry looks from my 16-year-old peers.) After we got the car back to the house, my father tried to fix it, the only result being frustration. He eventually just pitched the tools down in the dirt and said, "You pay this much money for a car, the shit's supposed to work."

Gone were those happy days of tinkering under the Bel Air hood.

And gone are the days where I'm patient with my PC gaming experience.