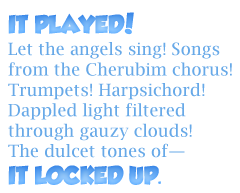 I had Fallout 3 for my 360, and lost weeks of my life to that game. I loved every grim minute.

I hesitated, however, buying the DLC, figuring that one day they'd hit shelves as the aforementioned GOTY edition. And it did. I was this close to buying the console version when I caught wind of a sale online that had the PC version for a bargain price. My PC was robust: a Dell XPS, above-average in terms of graphics and memory. So I ordered it.

What followed was a series of events that would make Sisyphus - with his onerous boulder-pushing - gibber and weep.

The game came with two DVDs: "Disc One," and the jauntily-named "Disc Two."

Disc One went into the drive. Installation went without cause for sadness or seal-punching. Never once did it ask for the second disc, so I assumed that when the time came the game would demand that I insert it. Easy-peasy.

I ran the file. Started up. Then -

Five minutes in, it crashed to the desktop.

I did some research, found out that lo and behold, Disc Two is not actually a drink coaster and that it must be installed separately.

Except, problem. Installation introduced the whirling blue circle of doom, a cursor not unlike the eternally-pirouetting hourglass. It hung. Inert. Unchanging. Once more I returned online (the manual was no help as it was the manual for the pre-GOTY edition) and there I discovered this is all totally normal. Let it hang! It's okay! Walk away!

"Glory of glories!" I cried, "it's once more time to murder mutant miscreants in the Wasteland!"

Except the game wouldn't even load. Instead, an error: "Original 5360 could not be located." And then something about "xlive.dll."

Another trip to the internet, another answer.

Games For Windows Live didn't auto-install, so that needed to be installed separately. Three hours into this process, what else am I going to do? I submitted. I installed.

And again, I tried to play the game.

That's where I tapped out. Any time I try to play the game, five minutes in, it crashes. Sometimes to desktop, sometimes the whole computer lays its fool head down and goes to sleep.

You were me, you'd punch a baby seal, too.

It's not just my desktop. It's my wife's, too. And my laptop.

Crysis crashes about 25 percent of the time - for a PC game, not a bad ratio. Sometimes it just forgets my graphic settings.

Left 4 Dead 2 works pretty well, honestly. Of course, nobody can seem to get their microphones to work: it's all just wordless staticky belches.

Red Faction Guerilla occasionally yells at me about "failure to authenticate."

Saints Row 2 tries to give me epilepsy by flashing the screen. Not always. But often enough.

The Sims 3 worked great ... until I got the expansions. Now it's sluggy. Boggy. Like a fat guy in rubber hip-waders slogging his way through a boot-sucking mire.