Novels, music, movies, comic books: they all maintain their own particular universe, complete with clichés and well-worn perceptions by those outside of their respective industries. For example, in the world of the music industry, it's assumed that touring with a rock band is a non-stop riot of partying, sex and drugs. And in the realm of literature ... well, everyone knows that securing a book deal is a golden ticket to fame and fortune. Right? 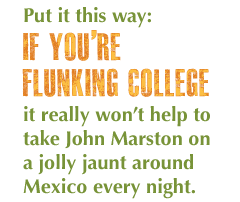 Wrong. Ask any seasoned musician and you'll find that - in most cases - tour schedules form a wearisome parade of packing, unpacking, sitting in airports and sleeping in vans. As for that debut novel which is going to launch you into the Stephen King stratosphere of success? Sorry to break it to you like this, but the average advance for a first-time novelist is somewhere in the region of $2000-5000. Not quite enough to start building that money bin. Misconceptions like these are everywhere ... and the realm of gaming is no different.

What are some of the most widely held - and oft-cited - fallacies concerning the gaming industry? The many gaming myths range in subject from cultural impact to production practices to aesthetic quirks. In the noble tradition of setting the record straight, then, let's take a look at ten of the most common gaming delusions, and how they are just not true.

The whole "videogames cause violence" warhorse is such a cliché that it feels almost unnecessary to debunk it. The Escapist could probably fill an entire article in itself with the numerous variations on this myth: from disbarred attorney Jack Thompson's ludicrous campaign against Grand Theft Auto to the story of 2004 murderer Warren LeBlanc and his supposed obsession with Manhunt (he didn't even own a copy of the game).

The blunt fact is that a kid who takes a cue from Commander Shepard to shoot up his local Wal-Mart wasn't really functioning on a "normal" level anyway. Correlations between videogame violence and its real-world equivalent do exist, but only when there were underlying issues in the first place - tendencies that conceivably could have been triggered by anything, and which really can't be blamed purely on Microsoft or Sony.

Of course, the myth of videogame violence is often countered with ...

Far from being the violence-inducing spawn of Satan, videogames are actually a godsend. They help boost problem-solving skills and reaction times. Anyone who plays games is almost certainly smarter than anyone who doesn't. Correct?

Well ... no. Not exactly. Nintendo DS games like Brain Age are launched with advertising campaigns that make a big deal of their "intelligence-building" potential. Such claims are almost entirely unfounded. Tests have shown that DS thumb-twiddlers are no better at a spectrum of intellectual pursuits than their non-gaming counterparts. While there is evidence that certain abilities are more abundant in gamers, the generally-held benchmarks of braininess - wider IQ tests, emotional intelligence - seem unaffected. Put it this way: if you're flunking college, it really won't help to take John Marston on a jolly jaunt around Mexico every night.