Everything is in place. A platoon of soldiers stands side by side in the snow, their weapons at the ready. A host of helicopters hover overhead, ready to deliver their explosive payloads to the city ahead. Off to one side, the armada of giant spider robot things whirs in place and belches smoke into the air.

This is Gnomish Warfare 101: A battle just isn't a battle until you've cracked into the giant spider robot things. 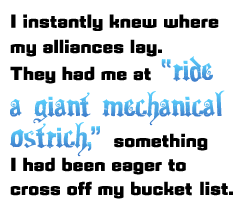 I'm right at the outset of one of World of Warcraft's pre-expansion world events - the retaking of Gnomeregan, the fallen capital of the gnomes. After more than a year away from the game, I've made a point of reactivating my account just to have a hand in the retaking of this city. But Gnomeregan is no normal city. It's a mechanical mecca of spinning cogs and whirring gears, a futuristic city of untold technological promise. A city that, if I had to be perfectly honest with myself, I secretly despise.

How did I end up here? Like everyone subjected to the steady hum of Blizzard's hype machine, I had a chance to peruse the world-shattering changes in store for players in their newest expansion, delivered in the breathless amazement of Apocalypse Soon. Once-lush zones transformed into wasteland! Lava streaming out from fissures in the earth! But for all the cataclysmic direness of it all, I found myself curiously unfazed. Maybe I'm just a bit wasteland-ed out. After the Burning Steppes, the Blasted Lands, The Badlands, the Plaguelands (East and West), scenes of widespread desolation start to blur together for me. And as someone who still has nightmares about disastrously bad attempts on Molten Core, I think I've had my fill of lava, as well.

More interesting to me were the political shakeups. A splinter group of disenfranchised goblins joining the Horde. The worgen siding with the Alliance, much to the consternation of Team Edward. A posse of gnomes preparing to retake Gnomeregan.

Forget all the continental Sturm und Drang. This is the kind of expansion news that turns my crank. As a die-hard gnome-lover, Gnomeregan has always been a sort of mecca to me - even before I had started playing. As part of a group of friends slowly organizing to give WoW a try, I used to flip through lore and concept art over at Blizzard's official site, and I instantly knew where my alliances lay. They had me at "ride a giant mechanical ostrich," something I had been eager to cross off my bucket list. Maybe it's my particular style of role-playing that inclines me towards the wrinkled and the weak, over, say, the dudes who ride around on cats and flip when they jump.