Huge fiery chasms in the very fabric of the world. Dramatic changes in the organization of zones. New races that will join the intensified battle between Horde and Alliance. Sweeping changes to storylines, game dynamics, and basic systems of play. To quote Woodrow Wilson, it sounds like a "New World Order" is imminent. Wilson used the term to describe what might emerge from the turmoil of the First World War, referring to a chance for something better. 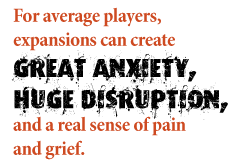 It's often true that huge upheavals can dramatically change the structure and order of life. In my business as a psychologist, when I see people in crisis, I often look for the hidden potential for new growth amidst the turmoil.

World of Warcraft players will be facing the same opportunity for a New World Order with the upcoming expansion. For God's Sake, they're calling it Cataclysm - get out of the way! The masterminds at Blizzard want to enhance the world's most successful MMOG with exciting new content and modern game experience - keeping it fresh is their key to keeping millions enthralled.

But what will it mean to actual players? Though I am not currently active, I went through two expansions (Burning Crusade and Wrath of the Lich King) and was profoundly affected, not always for the better. Remember, WoW is both a game and a community filled with diverse and complex social structures that have been painstakingly created through hard work, blood, sweat and tears. This includes connections with other players, attachments to guilds, roles within guilds, and the sense of mastery that you get from feeling that that you know how to play the game. A WoW character is also heavily reliant on the quality of its gear. With expansions, all that good stuff that you collected becomes instantly and permanently obsolete, and you have to scramble for a whole new set of best-in-slot items.

If you're an elite player who has mastered all endgame content, you're probably ready for something new, and confident that you can figure out how to work the calamity to your benefit. Or you might be very comfortable sitting atop your world and feel quite apprehensive that things are changing and you can't be sure where you will end up.

For average players, expansions can create great anxiety, huge disruption, and a real sense of pain and grief. While many of us savor the novel, most of us have a certain comfort with familiarity. At the end of Burning Crusade, I was very happy with my guild, my role within it and the progress we were making. We weren't top of the server, but we were solid, we had lots of fun together, and we seemed to be moving forward. The group had evolved to the point where structure, procedure, roles, and other social norms had stabilized in a way that fit well for me. This made my immense time commitment to the game seem worthwhile.