Up goes the knife! Down comes the knife. The mottled boar squeals with indignation, its low-polygon face a terrible mask of icy confidence. A worthy opponent indeed. He gores me for 4 damage. I am wounded! Oh, friend, send word to my mother. Tell her I always... tell her... 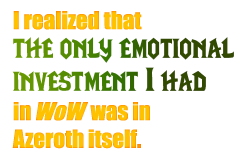 I'm doing my best not to think about a few things, here. Let me explain.

World of Warcraft: Cataclysm sees the return of the enormous, molten-bodied dragon Deathwing to Azeroth, and his careless exit from his sanctuary over in Deepholm breaks a stone called the World Pillar, which carries the weight of all the elemental and magnetic forces in Azeroth. So, with the release of Cataclysm many familiar areas are sundered, flooded, even irrigated. Sprawling plains now have peaks and hump-backs, deserts are given life, and the zone of Thousand Needles has become so flooded that its once-majestic butte tops are now islands.

But down on a human scale, there's something more disruptive going on here than the reboot of various territories. When World of Warcraft first came out, two of the areas receiving apocalyptic attention in Cataclysm, Durotar and The Barrens, were my home- or at least the home of my Troll warrior, Jatin, who I carefully guided to level 30 back in 2004.

Hearing that these places I'd spent tens of hours hiking around were going to be torn apart, reshuffled and "improved" made me nervous. In that moment, I realized that the only emotional investment I had in WoW was in Azeroth itself. So when I got access to the Cataclysm beta, I didn't make a Goblin or Worgen. I made a female orc shaman called Jilan. She was stocky and earthy where I remembered Jatin being lanky and elegant, but I wasn't really thinking when I designed her. I just wanted to see my home again.

The ability of the player to explore is what makes games unique. We all know this. The history of gaming is rife with keys and grappling hooks, full of caves and secrets and treasure. What is considered less frequently is the longer-term effects of exploring an environment, the ones that surface after that initial thrill of discovery. The more time a player spends in one area, the more they'll develop emotions towards it, and as the landscape becomes populated with memories, the place gains history.

In some ways, if a developer wants a player to gain an emotional attachment to something in their game, a location is a much safer bet than an NPC. Games have yet to develop any kind of tech that allows us to talk or interact convincingly with characters, meaning that there's always going to be some disconnection there. Plus, there's the risk that the player will find themselves forced to spend time with a character that they don't like or don't find believable.