For many of us, the best part of SimCity is filling every inch of the map with a finely balanced, aesthetically pleasing metropolis and then launching an endless series of disasters at it until the whole thing is a pile of rubble. It's an irresistible temptation that's easily indulged, thanks to the presence of saved games. There's no such safety net for Greg "Ghostcrawler" Street and the rest of the Blizzard design team when they unleash a world-shattering catastrophe in the upcoming World of Warcraft expansion, Cataclysm. 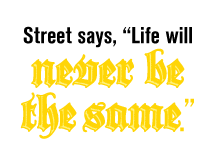 "We start off an expansion with a series of brainstorm meetings - 'What's cool? What can we do next?'" Street explained in an interview with The Escapist. "We kind of identified Deathwing early on and we knew we wanted some kind of explosive thing coming out of the ground. Originally it was a whole new continent we were going to do and we had a couple of ideas for zones." Street and the rest of the designers at Blizzard also thought Cataclysm would provide an opportunity to fix up some of the older zones that had dated art assets or quest design. "We started making the list of zones we wanted to touch up but it was like, 'Wow, that list is getting really long.' The more we looked at it the more we realized the story we really wanted to tell took place in the old continents and we could take out ideas for the new zones and work them in there and have the whole thing take place in the old world instead of making a new one."

Street is the Lead Systems Designer for World of Warcraft, meaning that he is in charge of how everything works in the game. In his own words, system design "specifically is everything that is not level, story, quest or encounter design. My team handles everything from classes to mechanics to items to trade skills to achievements to UI design, and that includes the game balance." He's one of the most public figures on the WoW development team, thanks to his willingness to engage players in direct and open conversation about the game on the official WoW forums.

Street identifies three main reasons for bringing the apocalypse to Azeroth. First, shock value was a crucial component. Deathwing's awakening is an explosive event for Azeroth. "We were trying to stage an apocalypse here," he says, "and we wanted some crazy things to happen and we knew there were sacred cows that might shock or upset players a bit." Many players will certainly be upset to see Stormwind ruined and Thousand Needles flooded, not because they were poorly designed but because Blizzard simply wanted to show the extent of the cataclysm's impact. As Street says, "Life will never be the same there."

Deathwing, the Unmaker, raises the stakes considerably. "We had so much luck with the Lich King being the main bad guy," in Wrath of the Lich King, says Street, "that we knew we needed a very charismatic villain to introduce early." (Contrast that with Illidan Stormrage in The Burning Crusade, who, in Street's opinion, wasn't introduced strongly enough for players to associate him with the larger arc of the story.) The addition of Deathwing doesn't mean that Blizzard is running short of villains for future expansions and content updates; the company has had great success in taking minor characters like Garrosh Hellscream and the returning King of Stormwind and making them an integral part of the world and a big part of Cataclysm.

The changes in the world aren't universally negative. Previously-obscure NPCs will have risen to prominence in Cataclysm, so a soldier who used to hand out menial quests in a small tavern may now be captain of the guard in the court of a king. There are even improvements in the geography. The bridge in Redridge, for instance, will be complete in Cataclysm and players will finally have a chance to look behind that big wall in Silverpine Forest. Blizzard, says Street, is relying on "the nostalgia factor for our long-term players or players who put the game down and are curious to come back and see it."