Seems I've gone and gotten myself into a pickle.

I shouldn't be alive, what with me being a lowly space janitor and all. (Okay, the text in Infocom's adventure title from 1983, Planetfall, says that I'm technically "Ensign Seventh Class," but I figure that's just fancy space-talk for "mop-and-bucket guy.")

The ship I was on, the Stellar Patrol Ship Feinstein, exploded. The next thing I know, I'm in an escape pod, landing on the last planet that anybody would want to crash upon: a planet plagued by plague, marauded by mutants, and whose celestial orbit has decayed to the point where there are endless meteor strikes.

On the Feinstein, everybody's either dead or in suspended animation.

The computers are all busted.

The robots are all in pieces.

Well. All the robots except Floyd.

I didn't know robots could be so stupid. But they can be. Case in point: Floyd. 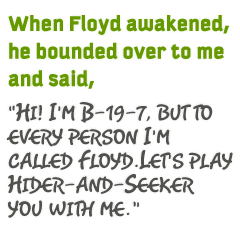 I found him in the robot workshop, powered off. I thought, "What the hell," and turned him on - after all, a robot is a creature of cold efficiency, laser-honed logic and deadly data. I could use his help.

When Floyd awakened, he bounded over to me and said, "Hi! I'm B-19-7, but to every person I'm called Floyd. Are you a Doctor-person or a Planner-person? That's a nice lower elevator access card you are having there! Let's play Hider-and-Seeker you with me."

Okay, I figured, this robot's obviously got a busted fromitz board.

He won't leave me alone.

Floyd follows me everywhere. I go into the mess hall, into the machine shop, into the medical lab, and here comes Floyd. He's got ADHD, this robot. Who programmed this damned thing?

Then he pulls out a crayon, writes his name on the wall.

He searches himself for rust. He oils his joints.

He exhorts me to play a game of Hucka-Bucka-Beanstalk. (I'm pretty sure he just made that up.)

Floyd wanders, natters, babbles. He runs through the first 600 digits of Pi as I'm trying to find food. When I pick something up, he cranes his neck to see what I'm doing. He yammers about that time when he bruised his knee. Then he yawns. He yawns.

What robot bruises his knee?

This little dude is irritating. Like a horsefly that won't stop batting itself against your head. Then, just when I think I'm getting used to him, he wanders away - "Floyd going exploring. See you later!"

And I feel lonely. Once more, this place feels sterile and dead.

Of course, it isn't long before Floyd returns. He bounds into the room: "Floyd here now!"

I'm happy and exasperated at the same time.

It occurs to me that he's not stupid. He's just got the robot brain of a five-year-old child.

He wants me to tickle him, so I tickle him, feeling like a dumb-ass because I am tickling a goddamn robot. But Floyd? Floyd loves it.

I play Hider-and-Seeker with him, and we run around like that until I'm exhausted. He doesn't care. He's a robot. He pokes me: "Let's play some more!"

I don't want to play. So I punch him.

Letters to the Editor: Second Banana The Escapist Staff 1 Comment