I'm clicking through the Fable III villager creator. I name the villager "Dave."

I answer the game's questions: Dave is born in the Bowerstone Market district. Dave threatens a dancing woman. Dave thinks he'll catch a disease from a fitting room. Dave wears second-hand socks, lives in the ditch behind a fish stall, and apparently wants to date "Morris the stable boy." 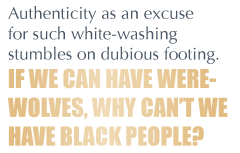 I'm told then that Dave is gay (a troubling correlation, since he appears to be an adult male that likes boys) that he is malicious, and that he suffers an "austere existence."

And then I go to design what Dave looks like.

I get three faces.

I realize it's a good thing I didn't want to create a black villager. Or a Hispanic one. Or an Asian-American, or Arabic, or Eskimo. Albion, it seems, is one big medieval White Power rally.

I suppose I'm not being fair. Albion, after all, is meant to be modeled after the England of the Middle Ages, is it not? "Albion" is one of the mythic terms for the country of England, with its white cliffs of Dover and its equally pale and pasty people, right? Certainly the England of old was not home to any other races ...

Except, we have evidence there of Moors, who were clearly black-skinned. The influence of Romans, many of whom were dark-skinned or who brought slaves of different races, persevered as well. No, the country wasn't exactly a paragon of ethnic diversity, but it also wasn't nearly as white-washed as a game like Fable III (or any Fable, really) would have you believe.

England in the Middle Ages didn't really have werewolves, blood-forged swords, or ancient black spires that channel magic, either. Authenticity as an excuse for such white-washing stumbles on dubious footing. If we can have werewolves, why can't we have black people? Are we really that worried about strained credibility in a game set in a fantasy world?

I thought, hell, let's go through a handful of games and see how they fare when put through their paces of crafting characters whose ethnicity is something other than Pasty White Person. I want to put myself in the shoes of a gamer who is distinctly not a White Dude. Can I create an avatar befitting my newly-imagined race? Will I find representation amidst the pixels? Or will my ethnic identity be lost within pink and pale 1s and 0s?

Games often avoid enforcing a non-standard racial choice because they purportedly offer the player the chance to choose their own through character creators like the one in Fable III. A noble thought, but how well does it really work?

A quick trip to other pseudo-medieval fantasy: this time, Dragon Age: Origins and World of Warcraft.

In Dragon Age, I can create a Dwarf, which is really a short, chunky white person. I can also go Elf, which is - what? The fantasy equivalent to a starving supermodel? And finally, I can create a "human," where "human" is defined purely as Pasty White Person. Okay, yes, you can change the skin tone, but they still appear to have largely Caucasian features - further, your character's family is still white, suggesting that this is a genetic deviation like albinoism rather than an emblem of true racial heritage. Do a little research and I find that, once again, Dragon Age is modeled after England in the Middle Ages, and that according to Lead Writer David Gaider, "The Rivaini are dark-skinned, and while I don't know if we'll ever actually go to Rivain the further north we travel the more common a sight the Rivaini will become." To gamers looking to create a dark-skinned character, he said, "Sorry you felt left out," then acknowledged, "I suppose it's fair to say that we need to be reminded from time to time that our audience is larger than that. While I've no interest in making Ferelden specifically reflect our own society, that doesn't mean we shouldn't let our players feel that people like they have a place in our world - whether or not it's a fictionalized version of medieval Europe."

One wonders who the Qunari, with their gold skin, are supposed to represent in this fantasy version of Europe? And once again, what happened to the Moors?