I am what you might call "ethnically ambiguous." Tan skin, brown eyes, curly hair, decent cheekbones. My face is a mélange of textures and influences. I am mixed after all - half-Black and half-Mexican. So for years, I've quietly resented videogames for not including many characters that look like me. There are a couple - but much like television and film, tan skin like mine is on the fast lane to "buddy" territory. I want more characters that look like me in games. As a critic and a writer, I'm able to discuss the issue in a public forum, but recent experiences have made me question whether such dissention is worth it. When is too much crowing about race in games "too much?" The truth is that it is never too much, and if I want to effect change, it must begin now, through challenging the developers of games through small, pointed examples of inequality and through praising the games that get it right. 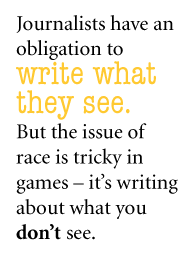 Earlier this year, I was excited to see that Skate 3 featured a character editor that would allow me to create a skater that looked me. Character editors weren't new, but Skate 3 was different. I spent most of my teenage years tagging along with my skater friends, listening to music, and haunting mall parking lots. Skateboarding was an integral part of my adolescence so creating an avatar that looked me was a feat of personal significance.

After spending 30 meticulous minutes crafting my digital twin, I quickly hopped onto a group mega-ramp competition. When my character was introduced, one of the other competitors quickly chimed in, "So who put the nigger on their team?"

I was not stunned - language in online communities is notoriously bad - but I was hurt. I rarely get attached to videogame characters, but in this case, my avatar was connected to experiences that I valued. It wasn't just me that this guy was insulting - it was a memory that I cherished deeply. So I did what any journalist would do: I complained about it on Twitter.

The response was quick and interesting. Most people displayed disgust and sympathy. In general, most agreed that this was a terrible thing that had happened to me. It was a small act, sure, but it felt important. It needed to be discussed in public. For too long, race has been the quiet topic in videogames. No one wants to talk about race. Journalists have an obligation to write what they see. But the issue of race is tricky in games - it's writing about what you don't see.

The Resident Evil 5 debacle still lives on in my mind as a watershed moment for writing about race in games. From Newsweek columnist N'Gai Croal's initial lament about the problematic images of a white man shooting Africans (zombie-ness aside) to New York Times critic Seth Schiesel's rebuttal, I saw a lot of dialogue and debate about the depictions of race in videogames. My own analysis in the Wall Street Journal felt like a personal triumph for me - I was able to bring an important issue to light in a clear and measured way and reign in a variety of voices to encourage enlightened debate.