"We've got to have rules and obey them. After all, we're not savages. We're English, and the English are best at everything."
-William Golding, Lord of the Flies

He sounded like a prepubescent Harry Potter, his voice high, sharp, chirpy. Not a crack, not a waver that indicated any hint of adolescence. 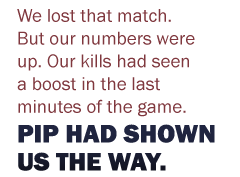 He sounded like Oliver Twist: "Please, sir, can I have some more?"

Or, as the name I've given him suggests, Pip from South Park, the little English boy with the bright blonde hair and the little cap.

I don't know where he came from. Was he there all along, just biding his time, his crisp European patience worn down like a nibbled biscuit? Or did the teams get rebalanced somewhere, Pip appearing as if out of thin air, drawn to our match and answering the call for a hero?

Pip came to us without pretension, without a rallying cry. He simply said, "Meet me on the north side of the road," then explained which building he was in and told us to watch for snipers coming out of the West. (Crossfire, the map that staged the battle, is essentially a landscape of dusty desert buildings with a zig-zaggy road in the middle.)

He was plain. Forthright. Downright declarative, like an admonishment from the Terminator: "Come with me if you want to live."

His words were easy to ignore. We're American Marines. Oo-rah or whatever. We're not going to listen to some little cor, blimey, bloody 'ell 12-year-old, right?

Except, we weren't really Marines.

And we were getting our genitals punted up through our soft palates.

I listened. I followed. Two others on our team did the same while the rest ignored Pip's instructions, running around like idiots with buckets on their heads, playing a game of grab-ass as they died again and again. Those of us who showed up found Pip - looking quite unlike the ankle-biting squirt you'd expect, what with our avatars all being tough-and-burly soldiers - and when we met his mark, he gave us our orders like it was the new normal, like this was how things had to be.

Pip told us to follow him. He told us that we were going to take out the sniper nest. He explained exactly where the snipers were, and which of us was to handle whom.

We stormed the nest. Snipers were stationed exactly where Pip had said. They didn't hear us coming. No flashbang was necessary, just the mean, hungry teeth of our machine guns.

We lost that match. But our numbers were up. Our kills had seen a boost in the last minutes of the game. Pip had shown us the way.

***
"Piggy, for all his ludicrous body, had brains."
- William Golding, Lord of the Flies

In Lord of the Flies, Piggy has the voice of reason, but the body of a toad. That is why his pleas and warnings are ignored (well, and he's also a bit whiny). The other characters in Flies drop a boulder on his head even though he has the conch - the conch of wisdom, the conch of "I have the floor" - and there he dies, his head smashed alongside the shell.