I do not know what Pip looked like. Fat or thin, blonde or raven-haired, tall and reedy or squat like a diseased tree stump. I know that here, in the online space, his looks didn't matter. I do know what he sounded like. Despite a voice indicating that he hadn't yet known the touch of a woman, he was calm, assertive, and utterly certain of his plan. 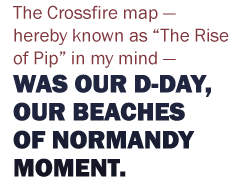 I know that he was our leader. And just then, I realized that this was one of the great benefits of the online space, of the multiplayer experience. Some of the leaders of the next generation were going to be born here - and it was in this place that these leaders would find their voices.

I realized this because suddenly I put words to how I felt: "I would follow this kid anywhere. I wish he would be my boss. I wish he would be the mayor of my town. Were he leaping headlong into the belching maw of Hell itself, I'd follow him beyond those ragged teeth because I know that he'd not lead us astray."

It's easy to dismiss players like Pip as being merely good at the game. But that's not what was going on. Pip was a critical thinker. He was an excellent communicator. He spoke to us as individual players and advanced our team strategy. He wasn't just a skilled button-pusher. He wasn't just a monkey. He was a leader.

Further, it's easy for someone, anyone, to dismiss gamers (online gamers in particular) as being a surly brood of racist, sexist dick-hats. Those kinds of players exist, of course, but painting them all with one big brush misses those who are not just good gamers but good people and good leaders, too. Such dismissal fails to see that in the online space lurks what may be our next president (or, at least, the next Prime Minister of the United Kingdom).

It was the turn of the tide.

The Crossfire map - hereby known as "The Rise of Pip" in my mind - was our D-Day, our Beaches of Normandy moment. I mean, sure, it was our watered-down online version of D-Day, largely devoid of any actual heroism, but, in that moment, it felt like we Marines had accomplished something.

The rest of the team realized what we had here: a leader with a plan. Soon, everybody fell in line, if not because they succumbed to a sense of reason and purpose, but because they too wanted a hand in victory. Nobody wanted to be the last asshole running around in circles, pawing at his pee-soaked pants as another sniper bullet peeled his scalp.

Yes, we lost that match.

But we played another ten or so after that.

And we won every goddamn one of them.

So, to you, Pip, if you're still out there: hurrah, I say, and oo-rah. When you're old enough to imbibe alcohol, I'll raise a frosty glass of Old Speckled Hen in your honor, and we shall sing songs at the pub of your glory. Hold the conch and sound its trumpeting warble proudly, my boy.

Chuck Wendig is a novelist, screenwriter, and freelance penmonkey. He's written for the pen-and-paper RPG industry for over 10 years, and is the developer for Hunter: The Vigil. He is represented by Stacia Decker of the Donald Maass Literary Agency. His website and blog is Terribleminds.