Dungeons & Dragons - or tabletop roleplaying in general - both repels me and attracts me. I can admit it now, freely. I am equally attracted and repulsed by rolling dice and pretending to be someone else in a dark room with an excess of snacks. I had never done it. Never thrown a d10 in anger. And I decided that it was about time that that changed. I will take the plunge; I'm coming out of the closet. I'm going to be a videogamer who's lost my tabletop virginity, and I'm going to tell you how it felt to abandon the keyboard and mouse for a bag of dice and a pencil. 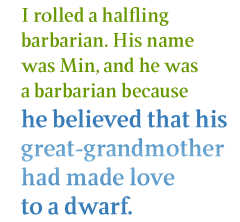 Why? Maybe it's just the equanimity of age. I tolerate or even like things I didn't expect to as a high schooler, like pop music, Buffy the Vampire Slayer, or interactions with other human beings. It could have been a matter of time. There's also Carlos the Dwarf, the fantastic storyline from the final episode of Freaks & Geeks, which normalizes D&D even for older, cooler future movie stars. Who could watch that and not be tempted? Finally, my then-roommate also started playing the Pathfinder Roleplaying Game, so his gear was all around me.

There is a physical appeal to the tabletop games. Once upon a time, videogames came with interesting collections of documents, manuals, and knickknacks. Opening the box could be as fun as playing the game. Those days are long gone (unless you shell out twice the price for a "Special Edition.") Seeing the gorgeous Pathfinder Player's Guide is immediately appealing to me as a fantasy fan, and I enjoy the aesthetics of board games and books at the tabletop game store far more than being in a corporate GameStop.

Although I've never played an RPG on a tabletop, I've done it tens of thousands of times on my computer. Computer roleplaying games are my favorite genre. I like them in all styles. I've played every Ultima, every Final Fantasy. I can wax poetic about whether Disgaea or Wizardry VII is the most complex videogame of all time. I've also played many, if not most, of the AD&D videogames released for the PC, and while I enjoyed many of them, I rarely loved them. I came to believe that they were more interested in adapting the D&D rules than being great videogames.

So with the idea of roleplaying and not min-maxing or beating the system in mind, I rolled a halfling barbarian. His name was Min, and he was a barbarian because he believed that his great-grandmother had made love to a dwarf. The rest of Min's family had forgotten this, but she was trying to reclaim their glorious barbarian past. His great-grandmother had even tried to grow a beard. I created Min because, well, I thought it was funny. Perhaps it would have been equally funny in Icewind Dale II - but I probably would have been the only one laughing.