"If you look at the Fighter and the way he works in D&D Essentials, we removed the Daily powers to get more of a sense that 'fighters and wizards should look really different,' because that's how D&D originally approached it," Mearls said. "I remember playing the Wizard way back in Basic D&D, where you had one spell and you had four hit points, if you were lucky, and you needed the Fighter to protect you. That's a much different playing experience than when you are playing the Fighter, where you're in the front line, you're taking all the risks, you're charging into combat. The game you played was different. The way I like to design things - especially in RPGs - is all about that feeling, that when you approach the game, you're approaching it the way your character would. You're thinking like a Fighter; you're thinking like a Wizard." 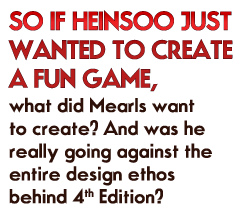 These sentiments were all the more noteworthy when contrasted with the stated design philosophy of another of Mearls' predecessors, Rob Heinsoo, who had explicitly praised the sameness of all of 4th Edition's classes: "The point of bringing in powers for every character class was to make the game fun for everyone most of the time." Heinsoo had also gone out of his way to slam design efforts built around simulating a fantasy world, saying that it "might make sense if you're simulating a specific type of fantasy world ... but it doesn't make any sense for new players who want to have fun."

So if Heinsoo just wanted to create a fun game, what did Mearls want to create? And was he really going against the entire design ethos behind 4th Edition? Justin Alexander elegantly expresses many players' problems with 4E in an essay titled "Dissociated Mechanics." Alexander damned the powers mechanics and marking system in 4E because they were not simulating anything that happened in the game world. For example, why could a Rogue only pull off his fancy Daily power once per day? The only answer was because those were the rules of the game, not because that was how combat ought or should work in the fantasy setting. We asked Mearls if he or anyone else at Wizards had read Alexander's essay or even considered how 4E was fundamentally disassociated from the world it ostensibly simulated.

"It's funny you brought that up because I'd read that blog entry. It's definitely something I've thought of," Mearls said. "If you're an experienced player and if you're willing to give some allowances to how the game works versus how you think reality should work, you're probably in a narrative mode. If you're more into the narrative side of gaming, you're used to taking mechanics and interpreting them to say 'this is what just happened.'"