But Mearls doesn't believe that most D&D players want to play that way. "I almost think narrative games are a different hobby, where it really is group world building or literal group storytelling. In a more traditional roleplaying game like D&D, you build it as you go and it's almost like a game of football or some sport where the action arises as you go." 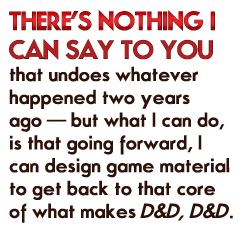 At this point in our interview I recounted for Mearls a hotly debated discussion with my readers about that very topic in a Check for Traps column, where I'd said the focus on "story" detracts from the actual challenge of play. "That causes a lot of the narrative-type guys to declare me Public Enemy Number Two," I told him.

"Who's the number one?" Mearls asked.

Now seemed as good a time to ask as any: Is D&D going to survive or is it in what some pundits are calling the death spiral?

Mearls is optimistic. "I think there's a lot of untapped interest for D&D out there, it's just a matter of meeting it. It's a matter of delivering it to people in a way that they can integrate into their lives. The challenge is to get them into the action quickly, hook them on it, and then pull them into it."

I found myself nodding. "My biggest problem in getting people to play in a campaign is literally just getting them to come to the very first session," I told Mearls.

"Exactly. The problem you face there is the challenge we face but on a bigger business scale."

For the 4th Edition detractors out there, Mearls had some closing thoughts.

"If you are a disgruntled D&D fan, there's nothing I can say to you that undoes whatever happened two years ago or a year ago that made you disgruntled - but what I can do, what's within my power, is that going forward, I can make products, I can design game material, I can listen to what you're saying, and I can do what I can do with design to make you happy again; to get back to that core of what makes D&D, D&D; to what made people fall in love with it the first time, whether it was the Red Box in '83, the original three booklets back in '74 or '75 or even 3rd Edition in 2004, whenever that happened, to get back to what drew you into D&D in the first place and give that back to you.

"If you're unhappy with 4th Edition, I say take a look at Essentials and see where we're moving."

Alexander Macris has been playing tabletop games since 1981. In addition to co-authoring the tabletop games Modern Spearhead and Blaze Across the Sands, his work has appeared in Interface, the Cyberpunk 2020 fanzine, and in RPGA AD&D 2nd Edition tournament modules. In addition to running two weekly campaigns, he is publisher of The Escapist and president and CEO of Themis Media. He sleeps on Sundays.

A full transcript of Alexander's interview with Mike Mearls can be found here.