There is something we are born with, some part of our collective unconscious that both attracts us to images of demons, the occult, and Hell, while simultaneously terrifying us. We love to fight against and alongside demons. We love to know the inner workings of heaven and hell. We want to know what power lurks below the surface of occult imagery. 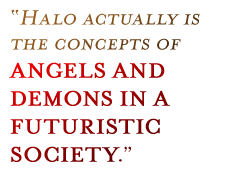 Videogames are certainly no stranger to the minions of darkness. The Warhammer universe is thick with hellish creatures marauding across the stars and Darksiders puts players on the front lines in the battle between heaven and hell. But according to Tamir Nadav, a designer on Warhammer 40,000: Dark Millennium Online and a localizer on Darksiders, the motivation for including them is often both simple and intimate: "Angels, demons, and ghosts are things that most people just have an innate understanding of."

"Every culture has its own version of angels and demons," he says. "They all boil down to representations of human traits. If you have someone that does only good and you exaggerate that, they become an angel, regardless of what's that called in the culture. If you have someone that's doing worse and worse things you exaggerate that, you create something that's outside the realm of human capability. You've got your demon. And ghosts represent the biggest quest to know what happens after we die. And because every culture has a concept of those three things, it's something we grew up with no matter [where] we come from."

He's right. Every faith and culture on the globe has its set of demons and angels. Most readers will be familiar with the Judeo-Christian models, but it doesn't stop there. Islam tells the story of Iblis, a powerful jinn (a race of spirits crafted from smokeless flame) who was best loved by Allah until he became jealous of man and was cast out. Sound like anyone we know? It doesn't stop there. Hinduism and Buddhism both host a pantheon of spirits that can represent the darker parts of human nature, from groups such as the greedy Asura to the blood-thirsty Rakshasa.

Open your mind enough, and you can see demons and angels going toe to toe in some surprising places, says Nadav. "Halo actually is the concepts of angels and demons in a futuristic society. The angel would be Cortana. She represents a celestial being that's invincible and manifests only to the main character. The Covenant represents the demons, trying to conquer, trying to destroy, with evil plans of consuming all of humanity. They basically have all the traits we ascribe to demons without the red horns and pitchforks."

Your conscious mind might not immediately associate those Grunts and Brutes with imps and demons, but we've become so familiar with the concept of devils, your subconscious connects the dots for you, says Nadav. "While they may not be cookie-cutter to what you picture, that concept is still there and still strong. I'd venture that a lot of successful games outside of the casual markets on consoles and sports, do have those themes hidden inside them," he says.

Talk about angels and demons long enough and eventually someone is bound to bring up specific religions: a political, emotional, and societal landmine if ever there was one. A good controversy can certainly bolster game sales, but dabbling in imagery that could upset the populace is always a risk. According to Jeremiah Smith, who worked for Mythic Entertainment as part of the design team on Dark Age of Camelot and helped bring the beholders to life as one of many designers on Turbine's Dungeons and Dragons Online, the key is maintaining perspective and balance.