I like to joke that Doom 3 helped me confront my personal demons. More specifically, it allowed me to chase them through hell during a difficult time in my life and pump them full of buckshot and armor-piercing slugs. Confidently blasting the guns of the game's nameless Marine, I slew the Cyberdemon, and that helped me somehow develop a game plan to face some real-life evils. Indeed, viewed through a fractured mirror, the simple but popular journey-through-hell plot has some significant similarities to the morality plays performed throughout Europe beginning in the 14th century, with an important contemporary twist. Rather than relying on repentance or divine intervention, videogames let us grasp the demons by the horns and fight our own way out. 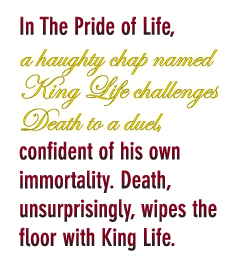 Medieval morality plays, according to Robert Potter's groundbreaking study The English Morality Play: Origins, History and Influence of a Dramatic Tradition, were all based on a single, inevitable pattern: "Man exists, therefore he falls, but nevertheless, he is saved." Only through repentance or direct intervention from God could a poor, sinful schmuck be yanked from the clutches of hell and attain redemption. And, nearly always, God obliged. It's a mindset rooted in centuries of dependence on higher authorities, whether they be the church or the crown, and in an age when the Black Death might scoop away kings and peasants alike, there was little room for self-determination.

Armed with a mission to "teach through entertainment," morality plays presented a cast of allegorical characters meant to represent the various forces pressing on the fortunes of the average person. This average person was usually embodied in an Everyman figure, most famously in the eponymous 15th century play. While that Everyman never swaggered into hell, others did. In The Pride of Life, a haughty chap named King Life challenges Death to a duel, confident of his own immortality. Death, unsurprisingly, wipes the floor with King Life along with his hapless bodyguards, Strength and Health. Demons run away with King Life's soul, but fortunately the Virgin Mary intervenes and King Life gets a one-way ticket to heaven. In The Castle of Perseverance, a good angel and a bad angel badger the hopelessly impressionable Mankind. The bad angel tempts Mankind out of the Castle of Perseverance with his buddies Lechery, Idleness, Gluttony and Covetousness, and Death crashes the party by attempting to carry poor Mankind away to hell. After bickering with the spoilsports Truth and Justice, Mercy convinces God to bail out Mankind and send him to heaven. With consistent endings like this, it's amazing that there's anyone in hell at all. In Potter's words, "the morality play embodies a generalized and remarkably optimistic conception of the human condition." Despite stern warnings, each morality play is capped with the protagonist's redemption and a comparatively happy ending.