"I shall purge this land of the shadow." - The Amazon, Diablo II 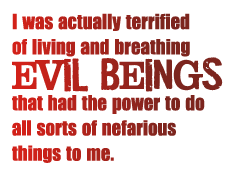 Two doors burst open and a pair of impossibly muscled creatures emerges with equal expressions of pissed-off menace on their minotaur-like faces. My breath catches as I deftly shift my mouse to the right, preparing to fire my chaingun in righteous self-defense. Through a combination of a well-timed strafe and dumping dozens of rounds into the maws of the red-skinned beasts, I conquer the level and walk triumphantly towards a platform engraved with a pentagram.

In the mid 1990s, the first person shooter Doom was arguably the most frightening experience a videogamer could have. For me, however, a shy youth raised in a church where something called "spiritual warfare" was a major part of our Sunday School education, the act of battling demons as a nameless space marine with an affinity for large weapons and later as a warrior in the Demon-centric action roleplaying game Diablo was an entirely therapeutic experience in helping me overcome my fear of real devils and demons.

When I use the word "demons," I don't mean it in the way people living in the 21st century usually do, as a clever metaphor to describe the hidden problems or nagging personal hang-ups that someone like Ernest Hemingway or Lindsay Lohan might have. I say those words in the most literal sense possible - I was actually terrified of living and breathing evil beings that had the power to do all sorts of nefarious things to me.

Even as I write the previous sentence, I'm aware of how odd that might sound. It sounds ridiculous to me considering that my own religious beliefs have eroded to the point of nonexistence over the past decade. On the spirituality meter, I now flit somewhere between agnostic and total skeptic.

The type of irrational fear that I suffered as a kid isn't a rare thing. According to a Gallup poll conducted in 2007, roughly seven out of ten Americans profess some sort of belief in the devil and in hell. Approximately 35 percent of adults in North America also conclude that Satan is a living being with supernatural powers, as noted by a more detailed survey conducted by Barna Group in 2009.

This surprising statistic is likely in step with the rise of evangelicalism in the West over the last fifty years. The still growing evangelical movement (well-known followers include TV preacher Billy Graham and former president George W. Bush) teaches that every word of the Bible is true, unerring and literal. While more liberal mainline Protestant denominations tend to view things like the devil and hell as symbolic ideas meant to personify acts of rebellion or evil, evangelicals perceive them as unquestioned realities.