Gamers on message boards constantly say - and yes, they typically write the following in caps - "HOW CAN THEY SELL AN OPEN COPY OF A GAME AS NEW WTFFFFFFF GAMESTOP SUX BALLZ?" The answer from GameStop's corporate perspective is this: Gutting keeps shrink to a minimum. Definition of shrink: Customer theft. Irrefutable fact: If you put an empty box on the shelf, there is no incentive whatsoever for a thief to steal it. 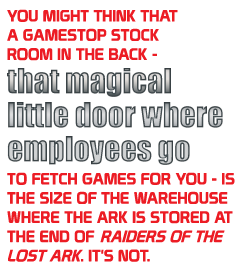 Gutting also provides store employees with a very useful visual cue that tells us what's left in stock. Don't see a box of Gears of War 2 on the shelf? Then someone bought the last one. Meaning we're out of Gears of War 2. Period.

One of the solutions typically put forth by disgruntled message board posters is this: "Every GameStop store should have a huge library of blank display cases to be used instead of the actual product. That way, they could just put photocopies of box art in those empty boxes and put them on store shelves. PROBLEM = SOLVED. WHY THE HELL DON'T THEY DO THIS? (BALLZ = GAMESTOP!)"

The people suggesting this solution have obviously never worked in retail. They are ignoring several important issues here.

1. The high cost of purchasing those empty game cases in not one, not two, but three different colors (Wii, 360, PS3).
2. The high cost of printing/photocopying high-quality box art that looks just as good as the original.
3. The overall time paid to employees to organize this entire convoluted system when they could be pushing used games on people instead. (Ed. Note: More on this issue in a future installment of the series.)
4. The overall lack of storage space within each store.

The store I worked in was pretty small. How small? A booth at the IHOP on Queens Boulevard probably has more square footage than our store had. And you might think that a GameStop stock room in the back - that magical little door where employees go to fetch games for you - is the size of the warehouse where the ark is stored at the end of Raiders of the Lost Ark. It's not. Ours was only slightly larger than the average phone booth.

Our store didn't have the space to house thousands of empty game boxes for games that weren't even in stock at the moment. No store does. So, from a corporate standpoint, that limited amount of square footage should be filled not by empty boxes, but by actual games that could be sold for actual money.

Before we move on, here's one more bit of information on the subject of gamers who complain about their boxes already being opened. The truth is this: 99 percent of all customers who come into the store do not give a rat's ass if a game is in shrink wrap or not. They don't. They would pay me. I'd bag up their already opened/gutted game. And they would go on their merry way without making a peep. That's a fact.

For the record, I'm with you on this subject. When GameStop sells me an already-opened copy of a so-called "new" game, steam practically whistles from my ears.

But the rest of the population? They really don't seem to mind.

Ben's story continues with part two of a four-part series next week in issue 274 of The Escapist Magazine.

Scott Jones is the co-host of G4/Tech TV's Reviews on the Run. You can read more of his writing at The Jones Report. He currently lives and works in Vancouver, British Columbia with his two cats and a healthy amount of self-doubt.