A few months ago I met a man - let's call him "Ben" to preserve his identity - who had spent a substantial amount of time working in a New York City-area GameStop. After listening to his account, I asked if he would be willing to speak on the record about his experiences. What follows is the first installment of a four part series telling Ben's story. 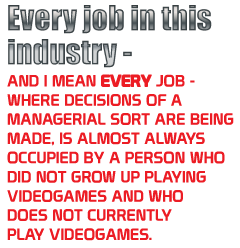 I needed a part-time job, something fun, something that didn't tax my brain too much. I'd just moved back in with my parents after college, back into my old bedroom. I planned on going to graduate school in six months, so I felt OK about letting myself regress a little.

The first week home I stopped by a nearby strip mall to kill some time and spotted a brand new GameStop under construction. The trademark electric sign was already in place above the door, but the front windows were still covered with newspaper.

I poked my head through one of the newspaper-covered glass doors. I spotted a man leaning against an empty display case, drinking coffee. "Come on in," the man said, waving me inside.

His name was Chris. He was the store's manager, or rather would be the store's manager once it opened. Chris looked like an older, much chubbier version of Dante from the movie Clerks. The entirety of Chris's gaming experience, I would come to learn, involved playing Madden until his eyes bled, and occasionally indulging in a round or two of Tecmo's boobs-are-everywhere fighting game, Dead Or Alive. That might not sound like much experience to most gamers. But I would soon discover that this was a mind-boggling amount of gaming experience when compared to other GameStop managers I would meet.

Gamers like to gripe about how obtuse videogame publishing companies seem to be, about how out of touch they are with our actual wants and needs. But what gamers usually fail to realize is this: Every job in this industry - and I mean every job - where decisions of a managerial sort are being made, is almost always occupied by a person who did not grow up playing videogames and who does not currently play videogames. I love games. You love games. But for these people, this is just a crappy job, or worse still, a crappy career path that they never wanted. It's a paycheck, a way to pay the bills. They have no history, no deep-seated, emotional connection whatsoever to what they're selling.

Besides a quick "yes" or "no" regarding a passing interest in gaming and showing an ability to write my name and address on a piece of paper, there were no other hurdles between me and a coveted position behind the counter at GameStop. The criteria, of course, vary from store to store, depending on the manager. But even when talking with friends who've worked the counters at other stores, the general rule is this: If you have any interest in gaming, however remote it might be, and you have a pulse, and your hygiene isn't too terrible, that's usually more than enough to get you hired.

I arrived on my first day of work to discover the newspapers still lining the front windows of the store. Chris explained that before the store could officially open, there was a lot of "behind the scenes" work that needed to be done.

I was assigned to "gutting duty." Gutting duty involved 1. Removing discs from their brand new cases/game boxes, 2. Putting said discs into cardboard sleeves, 3. Storing the discs in the alphabetized drawers behind the counter, and 4. Prepping the now shrink-wrap-free - and totally empty -cases/game boxes for display by labeling them with prices.

"Gutting" is done for both new and used games. This is the reason why, if you are the unfortunate person to get the very last copy of a brand new game, your case/game box has no shrink wrap on it, and has quite obviously already been opened (by me). Ever seen those old movies showing prisoners wearing striped uniforms and breaking rocks with sledge hammers and just looking completely miserable? That's what gutting duty feels like.