Imagine that I tell you about a particular creative work that has been engaged by millions upon millions of people all over the world. Many people interpret it differently - as emblematic of contemporary existence, as an unachievable fantasy, as political allegory, or as a metaphor for life itself. Yet although inviting a wide variety of interpretations, in truth, there is no singular or "proper" way of comprehending the piece. It is a work that haunts people's dreams and that changes the way they look at the world, a work that people find themselves coming back to again and again. And though different people have different opinions or reactions to it, there seems some universal quality about this work that speaks to everyone familiar with it in some powerful way. Sounds like we ought to put it in a museum, doesn't it? I'm talking, of course, about Tetris. 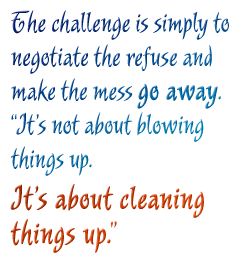 Over the years, a variety of players and critics have offered their own "reading" of Tetris. Literacy scholar James Paul Gee, for example, sees Tetris as an obsessive-compulsive fantasy unattainable in our haphazard lives, offering a satisfying perfection where everything fits together. By creating a smoothly logical world ruled by a comforting sense of order, Tetris allows "an escape into the very desire for order, control, and workable solutions that we have all the time," according to Gee, "a desire often frustrated in life, but never in Tetris."

Critic and author J.C. Herz suggests that Tetris is instead about the badly arranged blocks that need to be organized, triggering an anal-retentive desire to tidy up and watch the accumulation disappear. "It's about detritus raining down on your head, trash falling into messy piles and piling up until it finally suffocates you," she says, and the challenge is simply to negotiate the refuse and make the mess go away. "It's not about blowing things up. It's about cleaning things up."

And MIT professor Janet Murray suggests that Tetris provides the perfect metaphor for workaday monotony, where every completed task is replaced by a new one and "success means just being able to keep up with the flow." For Murray, Tetris embodies the unending toil of the desk job, "the constant bombardment of tasks that demand our attention and that we must somehow fit into our overcrowded schedules and clear off our desks in order to make room for the next onslaught."

But it's not only critics and academics who offer such thoughtful interpretations of the game.

Political philosophers focus on the game's emergence from the late days of the Soviet Union, suggesting the game as embodying (or critiquing) communist ideology: the anonymity of a society where all the unique and individual pieces merge together and become indistinguishable from the mass; the governing authority that maintains harmony by organizing and utilizing all the disparate members of society; the inevitable systemic collapse as the societal foundation becomes increasingly weak and fragmented and the powers-that-be can focus only on the most immediate problems.

Cynics read Tetris through its commonly experienced moments of poor luck, whether evincing the cruelty of the universe as life refuses to provide that one simple piece that would make everything come together, or a world in which one unfortunate and irreversible mistake makes all our plans end in ruin.

GDC 2014: Hearthstone Aims for Simplicity in Both Art and Play Encaen 10 Comments
Comments on