Ed. Note: This is the first installment of a four-part series discussing the philosophy of game design and how we define what makes a game "good." The series will continue in issue #274 of The Escapist Magazine.

If you've ever said that a videogame was "bad" for any reason - FarmVille is evil, StarCraft 2 is nothing new, VVVVVV is too hard, Braid is pretentious, Dwarf Fortress is inaccessible, Dead or Alive is sexist - in the performance of your royal duties as Grand Arbiter of Good Taste, then you also have to define and articulate what is a "good" game for us simple-minded folk. 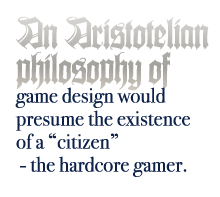 So, what makes a "good" game? Well, it all depends on whether you believe in absolute truth. (No, really!)

For purposes of simplification, I will ignore all traditions of ancient philosophy that took place outside of Greece. Instead, we'll just look at the two figures largely recognized as the roots of Western philosophy today - Aristotle and Plato.

Aristotle argued for a type of pluralism, where the purpose of a society was to ensure its individual citizens flourished (and by citizens, he meant only the small portion of Greek society that was the educated male land-owning military and gentry - sorry, women and slaves, no flourishing for you!) and such a person flourishes when he has reached a state of personal excellence or "eudaimonia."

Many people wrongly translate eudaimonia as happiness, but it is more than that - there's an aspect of self-actualization, the sense that you've finally achieved something. Surely, you deserve that feeling of achievement because you earned it.

So, an Aristotelian philosophy of game design would presume the existence of a "citizen" - the hardcore gamer. Under this account, the game should chiefly cater to this "best of the best," allowing these players to excel, perhaps at the price of accessibility for every other type of player.

"Everyone else" isn't worth considering because if they're not capable of beating the boss at the end, then how can they possibly feel the accomplishment of surmounting a challenge? It's not in their nature; they're incapable of feeling real achievement. "Watering down the difficulty" would only weaken the sense of triumph for the gifted individuals that can meet the challenge - that is, games must definitely be difficult.

Such a design philosophy was very popular in the 8-bit era with incredibly difficult and unforgiving platformers like Mega Man and Contra, games that rewarded players who demonstrated uncanny coordination and reflexes.

More recently, this attitude toward design has enjoyed a return of sorts, with the rebirth of the platformer genre in the indie games scene through games like Flywrench, Streemerz and VVVVVV, as well as a new sub-genre dubbed "masocore" that delights in constant and sudden failure - or you can also consider the surprising popularity of Demon's Souls as an example of this resurgence, a sort of neo-Aristotelian view of game design. These types of neo-Aristotelian games aren't "classically Aristotelian" because they don't harshly penalize the player for failure, often respawning them on the same screen if they die along with a healthy supply of infinite lives - unlike a game like Mega Man that forces a complete level restart upon running out of lives. Yet, these games still value difficulty and player reflex, despite such small gestures toward accessibility.

Featured Articles: Is It Still a Game If You Don't Play It? mockenoff 27 Comments