Earlier this year, Rohrer released the New Gamist Manifesto, a list of principles that challenge common thinking about games. The first tenet is "Games do not have spoilers." Rohrer acknowledges that some of his earlier games could have affected players differently without the element of surprise, like knowing your spouse would die in Passage or that your child will leave when you start taking him for granted in Gravitation, but would these experiences really be ruined by knowing in advance what was coming? 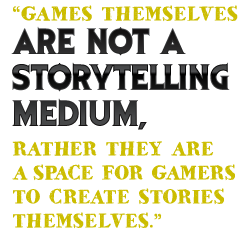 In games like Shadow of the Colossus and Metal Gear Solid 2: Sons of Liberty, there is some cross-over between linear storytelling and linear game design. These games both have significant mechanical changes towards the end, a transformation into a colossus in one case and a switch from stealth control to an analog stick-based sword fighter in the other. To create surprise at a dramatic moment in the game fiction, the game must sacrifice some mechanical intensity by introducing new controls, movement speed, and orientation.

"The ability to fly, or shoot fireballs late in the game might be a surprise if I hadn't heard about it beforehand, but doesn't really affect how much or little I think of a game," Richmond says. "In fact, I usually find the reverse is true in games. Introducing mechanics late in a game without enough run up or training on how to use them is a much more damaging, and unfortunately common, proposition."

This falls in line with another of Rohrer's tenets, that playing games is more like learning a new language. In this analogy, surprise may well be present, but generally irrelevant to the real process of absorbing the scope and personal capacity of the language. If the real value of a game is as an expressive system designed to empower abstract interaction between people, introducing a surprising new twist obscures its truest purpose.

"Games themselves are not a storytelling medium, rather they are a space for gamers to create stories themselves," Peter Zackariasson, a researcher at University of Gothenburg and partner in the game consultancy CIN, explains "If you look at a game that has both gameplay and storytelling, like Mirror's Edge, the gameplay didn't really fit with the storytelling.