"I think most gamers that completed Mirror's Edge enjoyed running and jumping and solving puzzles, but the story was just in the background leading the player forward. The game would still be enjoyable without a story," he continues. 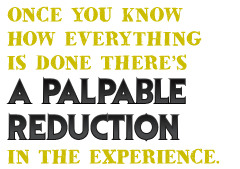 Indeed, Mirror's Edge is a series of simulated physical experiences without arbitrary tool upgrades or stat boosts. It draws players through a constructed environment that gradually asks them to do more and more with the mechanics they've had from the beginning. Knowing that you'll end up on a skyscraper rooftop at the end of the game doesn't ruin any of that sensorial exhilaration.

"For Limbo, there were spoilers out early," Patti says. "There were speed runs out three days before the game came out. One of the reviewers had speed run it. He asked us if he could release it. I said, 'I can't stop you, but I would really appreciate you waiting until it's out.'"

Limbo is a game built around puzzles that generally possess only one possible solution; knowing how that solution in advance would deflate much of the meaning of the experience for the player. Similarly, Braid is a game that seems especially vulnerable to mechanical spoilers. Jonathan Blow published his own walkthrough when the game was released, in anticipation of all the others that would threaten to diminish the experience of his creation. The twist was that Blow's walkthrough only described the most elementary parts of the hub, and players were chastised for clicking on the link for the next section. "Braid is about the journey, not the destination," Blow wrote in the walkthrough's conclusion. "If you use a walkthrough to bypass some of the puzzles, you will be robbing yourself of that journey."

The reason puzzle games can be spoiled so easily is because they lack mechanical ambiguity. In fictional terms, they're like mystery stories whose function is entirely dependent on surprise. Once you know how everything is done there's a palpable reduction in the experience. They work best as a one-way experience, like a serial that compensates for its lack of thematic richness by withholding its literal secrets for as long as possible.

The Escapist Presents: Who Should Win: Valve Or Irrational? GameFront 3 Comments
Comments on