Games are at their richest and most ambiguous when played with other people, as simultaneous acts of expression and interpretation. "When you think about chess and why it works, people will talk about it as a puzzle generating system where you and the other player are posing micro-puzzles to each other," Rohrer says. "Each new game is a whole new set of puzzles for you to face. Seeing games as puzzle generating systems as opposed to containers or capsules or vehicles for delivering puzzles is a more interesting way to look at games." In that light, the only way a game can truthfully be ruined is if one side declines to contribute anything. 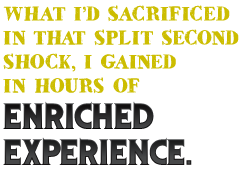 This still leaves the question of story spoilers open. Someone's experience with BioShock might be different if they knew Fontaine's secret in advance, but an effected experience is not at all the same as a spoiled experience. When I played BioShock I already knew that I was a puppet, so when I reached the shocking reveal I appreciated its cruelty and simplicity. I knew it was coming, but I had time to absorb how thoroughly the groundwork had been prepared for it. There was such a rich context for that turn that I feel I got more out of BioShock precisely because it had been spoiled for me. What I'd sacrificed in that split second shock, I gained in hours of enriched experience tracing the theme of free will through every in-game experience.

I still struggle to understand why people invest so much in the idea of spoilers. In a spoiler-free world anyone could have been Luke Skywalker's father. Ahab might have outlived his whale. Henry IV could still be drinking in a pub. Clarissa Dalloway might have walked out on her husband. Choosing to remain in this world of uncommitted possibility feels dishonest to me, favoring the momentary excitement of revelation over a confrontation with what those final, fixed moments mean. It's like a child wanting to live in a world where the presents under the Christmas tree are perpetually wrapped and they all have her name on them. The moment of discovery is not the end, but the beginning. If the gift is worth having it won't need any wrapping at all. The shiny paper only prolongs the reconciliation between what you were hoping for and what you got.

Michael Thomsen is a writer in New York. He is a Contributing Editor to IGN and The Faster Times, and has written for the ABC World News, Nerve, Edge, Gamasutra, EGM, and others. You can follow him at www.manoamondo.com.

Game Theory: Why the Official Zelda Timeline is Wrong MatthewPatrick13 44 Comments
Comments on