It's hard to know the exact the origin of the term "spoiler." The idea that learning some plot points in advance can ruin a work seems at least somewhat absurd. The Godfather is no less rich for knowing Michael will eventually take his father's place. The Legend of Zelda: Ocarina of Time is no less charming and puzzling when you know Gannon will arrive at the end. 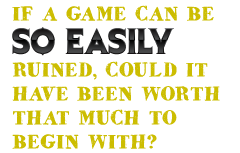 Yet there is something irresistible about the impulse to fear total deflation from knowing a story's surprises, something that likely stems from geek culture. The Awl traces the first popular use of the term to a Usenet discussion about Star Trek 2: The Wrath of Khan, and since then avoiding spoilers has become an unspoken rule. It's especially prominent in videogame communities where articles, forum posts, and conversations are regularly punctuated with spoiler alerts. What is really at risk of being lost by knowing the ending in advance? If a game can be so easily ruined, could it have been worth that much to begin with?

"We try to maintain a fairly high level of secrecy regarding what the specific plot and story beats are for an upcoming game," Justin Richmond, Game Director at Naughty Dog, says. "When making the Uncharted games, we try to build them as much like a roller coaster as possible, so the player is constantly off-kilter and the game is a rush to play."

In this way videogames, like the storytelling media that precede them, are most cherished when they deliver surprise. To forgo this surprise and its consequent gift of reflection untouched by anyone else's theories is to have spoiled a work entirely.

"I myself hate to be spoiled," Dino Patti, CEO and co-founder of the Limbo developer Playdead, explains. "I really like to be unbiased. If there's a movie I want to see, I stop the trailer before it starts because the best experiences I've had are when I didn't know anything in advance."

In some ways, the desire to experience a story without any prior exposure is a way of adding play into something inherently non-interactive. You cannot change the course of a movie or a novel, but in trying to decipher what will happen next you have some small way of investing yourself in an otherwise didactic platform.

"You're supposed to be going along not knowing what's going to happen, you're supposed to be beguiled just like the main character," Jason Rohrer, developer of Sleep is Death, Primrose, and Passage, says "That experience is very powerful, the revelation. It gives you chills and makes your mind reel, but maybe it's not as rich as some of the other things we can do with these media."