Would we would get pissed off about the quality of the games they were sending to us? Absolutely. Picture me shaking my fist in the direction of the Uptown Store. But when you think about it, can you blame them really? When it came time for me to send used games to other stores, do you think that I hand picked only the finest, mint condition games that my store had to offer? Not a chance. Instead, I'd put together a collection of games that were in such terrible shape that, on the great continuum, these "games" were not really even games anymore, but borderline trash. I'd pack them up, give the FedEx box a big kiss, and send them on their merry way. 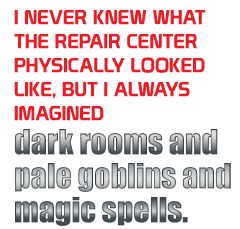 One of the few genuinely useful things I learned during my time at GameStop is that almost any scratched game, no matter how bad it seems to be damaged, can usually be resurrected. Even game discs in the shittiest shape can almost always be resurfaced and repaired to working condition.

Here's the highly-scientific test we used to determine whether or not a disc is repairable.

Step 1: Hold the disc up to the light.

Step 2: If light is coming through anywhere on the disc's surface, the data in that spot is literally gone forever. That meant the disc is dead.

Step 3: Inform the customer that their disc is trash.

But if the disc was scratched to hell but still opaque? That meant that we could salvage it using our disc-refurbishing service. So, if a guy brought me a still-opaque copy of Dino Crisis, I would still give him store credit for the game. But I would also have to "charge" him a couple extra bucks against whatever credit I was offering him for disc refurbishing - a.k.a., in store jargon, a "refurb fee."

If a disc needed "refurbing," it would get separated out and sent to GameStop's repair center for resurfacing. The same thing happens if a customer buys a used game, takes it home, discovers that it doesn't work, and returns it as defective. In both cases, the games get stacked with the other to-be-refurbed games to be sent to GameStop.

A few days later, after the GameStop repair center worked its alchemy on them - I never knew what the repair center physically looked like, but I always imagined dark rooms and pale goblins and magic spells - the discs would return with their surfaces miraculously intact again.

One of my favorite aspects of working the counter: I loved it when people tried to trade in games valued at less than $2 that required refurbishing. That meant that, after subtracting the refurb fee, I got to tell them their game was actually worth - you guessed it - negative credit.

Whenever this would happen, people would always look at me with these really confused looks on their faces, as if I'd just struck them over the head with an over-sized cartoon hammer. This is when I gave them what I liked to call "The Explanation": "OK, look: your copy of Dino Crisis is worth a dollar," I would say. "But because it's damaged - what the heck did you do to this thing anyway? - I have to send the disc out for refurbishing, which costs two dollars. So, that means, you would wind up owing me a dollar."