In this moment, I would make a big show of putting their scratched-up disc back inside the usually sun-bleached, manual-less game box. I'd hand the box back to them and say, "You're better off just putting this in the garbage."

What was I really saying here was this: "TAKE BETTER FUCKING CARE OF YOUR GAMES NEXT TIME, JACKASS."

I lived for these moments. 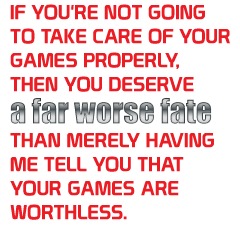 Would I judge customers based on how well or how poorly they had taken care of their games? Answer: If you're going to come into my store and pull a dozen scratched up game discs out of your back pocket, without cases or manuals or anything, and you drop them on my counter - this actually happens more often than you think - then yes, absolutely, I am going to judge the living shit out of you. As far as I'm concerned, if you're not going to take care of your games properly, then you deserve a far worse fate than merely having me tell you that your games are worthless.

Other trade-in customers simply could not grasp the concept of supply and demand. They'd come into the store with a two-year-old copy of Madden a month before the new version is about to come out and drop it on the counter like they were here to do me a huge favor.

I'd look at the computer, then inform them that their game was worth $2.50. More often than not, they would go ape-shit. "But I paid $60 for this!" they'd say. Then they'd almost always add: "COME ON."

I'd open our used game drawer and pull out no less than 20 copies of the version of Madden that this person was attempting to trade in. "And we've probably got at least 30 more copies of this in the back," I'd say.

They'd usually get the point. Some people would act like I'd insulted a child of theirs. They'd snatch their worthless copy of Madden NFL '04 off the counter and exit the store in a huff.

Funny how games have matured as a medium, yet most of the people who play them have not.

The more reasonable, more adult customers would stand there and accept their fate - i.e. their $2.50 credit - in silence.

Personally, I think that GameStop is a terrible place to get value for your games. Though one thing it does having going for it - or rather, it did when I worked there - is that you can always trade in any game for any current-gen platform, regardless of whether we had one copy or a hundred copies in stock at that time, and get at least a buck for it. (Assuming, of course, that it wasn't a refurb situation.) Worst case scenario: Sure, you might only get $1 for your mint-condition copy of FIFA: Street, but that's more than anyone else in their right mind would ever give you for it.

Ben's story continues with part three of a four-part series next week in issue 275 of The Escapist Magazine.

Scott Jones is the co-host of G4/Tech TV's Reviews on the Run. You can read more of his writing at The Jones Report. He currently lives and works in Vancouver, British Columbia with his two cats and a healthy amount of self-doubt.