"Don't be a fucking pussy," says Jonathan Blow, creator of Braid and well-known firebrand. The panel he's on is discussing the risks of the independent games development. It's been a slow burn until now. "I went and made a game, and I was kinda hungry for four years, but that's not a real problem. It's not like you're going to get bitten by a snake trying to find food tomorrow."

Welcome to Fantastic Arcade, the new voice of indie gaming. 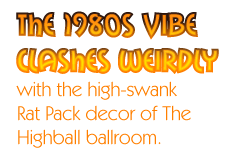 Headquartered in the famed Alamo Drafthouse theater and its nearby bar The Highball, Fantastic Arcade is the new wing of the insanely popular film festival Fantastic Fest - four days of game demos, industry panels, competitions, and film screenings devoted to the emerging independent game scene.

The spotlight arcade is a time warp: clusters of arcade cabinets proudly sporting track balls, vibrant cabinet art, and big buttons that go clack. Every game is a modern indie title loaded into a vintage machine. The 1980s vibe clashes weirdly with the high-swank Rat Pack decor of The Highball ballroom.

The old school presentation is a bold statement. In a year when consoles seem obsessed with using motion capture and 3D screens to change the way we interface with games, Fantastic Arcade features controls that are aggressively atavistic. It frames a unique, back-to-basics thesis that it isn't the controller that makes a game fantastic, but the software and how it engages the player.

"Videogames are getting shortchanged as a creative medium, and we wanted to create a place where their creators could be treated as equals to the filmmakers we host," says Tim League, Fantastic Fest's director and beer-swilling ringmaster. In the week following our phone interview, he will sing karaoke with Elijah Wood and the RZA, and fight Michelle Rodriguez in a boxing match. "We feel like there's a natural overlap, and we want to get the wheels turning on a crossover between indie films and indie games."

The spotlight games are antique-shop eclectic. Heading up the pack is jury award winner Enviro-Bear 2010, the iPhone sensation about a bear driving a car, which boasts charmingly shoddy MS Paint graphics and a control scheme that's simultaneously hysterical and infuriating. Other games include the robot puzzle adventure Machinarium, co-op heist game Monaco, Swedish redneck side-scroller Norrland, and cuddly physics platformer Feist. The smash multiplayer game of the festival, Nidhogg, is an 8-bit attack-and-defend fencing game where the players have infinite respawns, making it a sort of one-touchdown Super Bowl with swords, death pits, and a giant mutant worm.

Two envelope-pushing titles that could be broadly called socially conscious "art" games provide the best look at the potential of the medium, and reinforce Fantastic Fest's edgy reputation. The most disturbing of these is Ulitsa Dimitrova, where the player controls a chain-smoking Russian street urchin as he goes about his daily life begging for money, selling glue to street-side huffers, and stealing vodka for his prostitute mother. If the player stops giving orders, the boy lies down and freezes to death. It won "Best Family Game." Third place jury award winner, Every Day the Same Dream, is in a similar vein. In Every Day, the player controls a faceless, nameless office drone who repeats the same banal work commute over and over - unless the player ignores the game's instructions and breaks the cycle.