Before we look more closely at the philosophy of art (or "aesthetics") and games, let's just briefly consider some of the answers for that notorious question: "Are games art?"

- YES, says Tim Schafer, because games can express thoughts and feelings just like art can. Shadow of the Colossus made me and my dad cry! Afterward, we sat in a dark room in profound silence for an hour. 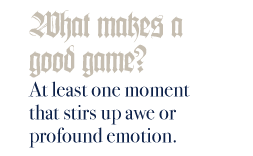 - WHO CARES? implies Matthew Burns. Instead we should go do something that's actually important, like playing videogames.

- NO, says Roger Ebert, because art is about an artist; if the player determines the outcome, that flexibility betrays the artist's intent. Tragedy is satisfying to witness, but players will rarely choose to plunge themselves into it - they want the "good ending."

- NO, says Tale of Tales, because art is dead and games are alive - comatose maybe, but still alive. Blame the coma on games that favor established settings and scenarios over innovation and creativity.

While there are clearly some differences of opinion on whether games are art, we still fundamentally regard them as merely "differences of opinion." Relativistic notions of individual rights and personal freedom have flooded our contemporary sense of aesthetics. Anything can be art, almost anything can be liked by anyone, and everyone has their own personal tastes in things and their experience of art.

Well, that's kind of the position that Ebert eventually retreated to in July 2010 - that games still weren't art for him, but maybe they're art for someone else. So what makes a good game? The existence of any fans who will argue that it's good.

But artistic appreciation was much more rigid in Plato's time. He argued specifically for certain values like "beauty" and "harmony" as important aspects of art, but with some stipulations.

For instance, picture a circle in your head. It's probably a perfect circle. Now try to draw one freehand, or with a stencil, or using the "Circle" tool in Photoshop. Any physical manifestation of that circle, no matter how hard you try, is always going to be slightly off from that perfect circle - by just a few pixels, molecules or atoms. Similarly, any attempted physical manifestations of ideal beauty (i.e. the "art" a human produces) will always be just slightly off from that ideal, existing only as mere imitations of the perfect mental image.

Many philosophers weren't satisfied with this idea of beauty founded on rigid principles of harmony and such. They coined a "sublime" separate from beauty. This "sublime" was more about witnessing overwhelming profoundness, admitting that it's beyond your puny human ability to comprehend it; as if you're looking down at Earth from orbit, or watching a nuclear bomb explode. It isn't necessarily indicative of anything, good or bad, tasteful or disgusting, etc. (Some philosophers also tried to distinguish between different kinds of this "awe," between weak awe and strong awe, and so forth.)

That account of the "sublime" is what supports Schafer's answer, which is one of the most common "Yes" responses invoked by gamers. What makes a good game? At least one in-game moment that stirs up awe or profound emotion of some kind.

Featured Articles: Is It Still a Game If You Don't Play It? mockenoff 27 Comments

The State of Gaming Nature Andrew Bell 70 Comments
Comments on