The world of videogame reviews is perpetually wreathed in chaos. Controversy surrounds it at every turn, and it would appear we can't have a single game review turn up without some manner of complaint, outraged scream of bias, or accusation of shady business. 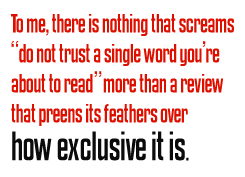 The latter is a subject that causes much concern, and with good reason. As the reviews editor for Destructoid.com, I've come to feel that a review is duty-bound to do right by its reader, to provide an insightful, factual, and above all, honest assessment of an expensive videogame purchase. If a review cannot be trusted, then what's the point of it even existing?

So, it never fails to surprise and disappoint me when an outlet boasts of a "world exclusive" videogame review. To me, there is nothing that screams "do not trust a single word you're about to read" more than a review that preens its feathers over how exclusive it is.

The very concept of review exclusivity does a complete disservice to consumers and goes against the idea of a review's existence in the first place. An exclusive news item, I understand. That almost guarantees you'll get your article sourced from other publications, and you'll get to feel like a journalist for a day. An exclusive review doesn't generate link-in hits, and considering even late reviews generate huge amounts of traffic on their own, I don't know how stopping other outlets from running their reviews actually benefits anybody in the long run. But these grievances are not germane to the issue that lies at the core of this - exclusive reviews simply cannot be trusted. I'm not one of those morons who scream "BIAS" or "MONEYHAT" over every little review, and I would never go so far as to outright accuse another reviewer of accepting some kind of dodgy deal behind closed doors. However, that's exactly what an exclusive review says.

An exclusive review says that something has been brokered. It says that the publisher knew of and approved the content of that review before it went live. It says that the reviewer is quite happy to become a PR thrall and a glorified advertiser just so he gets the glory of shouting "first" like a dimwitted forum poster.

Whether it's true or not doesn't matter. It's all about appearances, and an exclusive review gives the appearance of something unethical transpiring in the shadows. Even if a reviewer is as honest as the day is long, the very fact that his review is up before everybody else's makes it look like he cut a deal and that colors the entire review. I simply can't trust a review which was obviously mutually agreed upon by the writer and the game's publisher.