If you had to predict the details of Deus Ex: Human Revolution based on its trailer from this year's Tokyo Game Show, you could be forgiven for assuming that it's a movie. 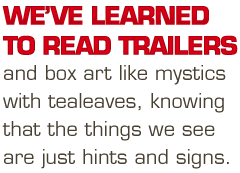 The trailer teases viewers in the manner of great movie trailers, offering glimpses of the game's set pieces, its action, and just enough of the dialogue that you can get a sense of the whole work without feeling as though you're already too familiar with its parts. It makes Human Revolution look like the post-millennial heir to Blade Runner and Dark City: a visual feast that will be a science fiction touchstone for decades.

But Deus Ex 3 isn't a movie; it's a videogame and so carries with it the promise of interaction. The world you see in that trailer won't be one you watch in a darkened theater but one you'll inhabit and explore, controller in hand. Those people you see are characters you'll meet; those cityscapes are ones you'll fight, sneak, and run through. As brilliantly evocative as the trailer is, it does not, and cannot, truly speak to the experience of playing the game.

This is not a problem that's unique to this one trailer. Nearly every major release these days is heralded by a cinematic trailer that might be rendered by the game's engine but contains little to no footage of the game actually being played. Trailers are usually rolled out when the game is announced, creating a vision of it sometimes years before its release.

When asked about the Human Revolution trailer, its director, Kody Sabourin, said it was created to "immerse viewers in the feeling of what the game is all about" and expressed his hope that it "shows how fascinating the world of Deus Ex really is." That's really the purpose of these cinematic trailers: to evoke an idea of what a game's developers hope the game will feel like while you're playing it. Diablo III will mostly involve killing small groups of things and looting the bodies for gold, but Blizzard no doubt wants you to believe your dungeon-crawling is part of mythic, world-shaking events. Halo: Reach never feels as desperate, dramatic, and downright heroic as the "Deliver Hope" commercials would imply.

We know this. We know this in the same way that we know a game's box art doesn't really depict anything in the game. We've learned to read trailers and box art like mystics with tealeaves, knowing that the things we see are just hints and signs. What we easily forget, however, is that the screen shots on the back of that box, and the gameplay footage available on the web, are every bit as divorced from the experience of play.

Gallery of the Day: 8 Trailers From E3 That You Shouldn't Miss DrStrangelove 6 Comments
Comments on