Japanese game developers have proven that if any country loves the Devil, it is Japan. Judeo-Christian demons or their analogs have been thwarting players from 1985's Ghosts 'n' Goblins to modern-day series like Devil May Cry. The Castlevania series has Dracula as its antagonist, who not only hob-nobs with foes like Beelzebub and the Grim Reaper but has a Romanian name that translates to "Son of the Devil." Ignition Entertainment recently announced its latest game would be El Shaddai: Ascension of the Metatron, a game that pits the player against fallen angels and is based around a book from the Old Testament. And just about every Japanese role-playing game features its own spin on the Biblical God versus Satan story. 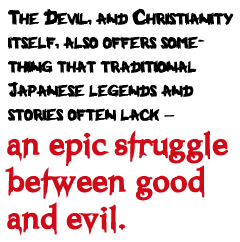 But where did this fascination with Western religion come from? Very few Western games incorporate Japanese myths, so what do the Devil and Christian lore add to these games that Japanese culture does not? While some of its popularity can be attributed to the success of Western-developed RPGs such as Ultima and Wizardry in Japan, the Devil, and Christianity itself, also offers something that traditional Japanese legends and stories often lack - an epic struggle between good and evil. What's even more interesting is how Japan has spun that story to fit its own history.

Much of our civilization is based off the traditions and societies of medieval Christian rulers. They themselves were influenced by the stories of the Bible, one of the cruxes of which is the struggle between good and evil, salvation and damnation. In contrast is Shinto, generally accepted as the oldest belief system of Japan. One of the most important differences between Christianity and Shinto is that Shinto does not focus on the personal relationship between humans and a god and does not have a central dogma for its adherents to follow.

Shinto is based around the concept of "kami," spirits that share the world with humanity and can appear as rocks, rain, animals and other aspects of the natural world. In the Shinto world, even the smallest object may have a spirit, making it just as much a part of the world as humans. Mankind is not innately better than anything else in his environment, as opposed to Christianity where God gives humanity dominion over the creatures of the air, sea and "every creeping thing that creeps upon the earth."

Another good example of the differences between the two religions can be found in their creation stories. Christianity has God creating the heavens and the Earth in six days, creating a garden and creating man and woman, who ultimately give in to the temptation offered by Satan. Shinto has the husband and wife deities Izanagi and Izanami creating the world and Izanami giving birth to many of the world's spirits. When Izanami ultimately dies in childbirth, Izanagi descends to the underworld to bring her back, but upon seeing her and realizing she is a rotting corpse, he flees and seals the entrance to the underworld with a boulder. Izanami, enraged, declares she will claim 1000 of Earth's creatures every day, to which her husband replies that he shall create 1500.

Pixels and Bits: Why Ghosts 'n Goblins Is One of the Most Difficult Games Ever Lizzy Finnegan 12 Comments