The struggle between Izanagi and Izanami is not the battle between good and evil of Christianity, but the natural struggle of life against death. Both stories center around two conflicting forces, but while the Christian story is about salvation from demonic forces, the Shinto tale seeks to explain the natural occurrences of the world. 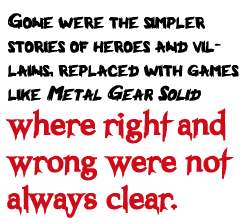 Compare the East and West cultural roots to early videogames. Nuance wasn't a strength of 80s gaming technology, which is why stories were often told in broad strokes so that there would be a clear distinction between the player and his or her enemies.

Stories in early games often broke down into several archetypes: man vs. wild; man vs. man; man vs. ninjas; man vs. space aliens; man vs. royalty-stealing wizard turtles. These all play to the fact that every game needs an adversary, whether it's the dealer or the dungeon master or the computer. And what better adversary is there than The Adversary himself? For the exaggerated, larger than life stories of early games like Final Fantasy and Castlevania, Satan and his counterparts were a perfect fit.

As the technology available to game designers became more sophisticated, the traditional good versus evil narrative in games began to change. Gone were the simpler stories of valiant heroes and despicable villains, replaced with games like Metal Gear Solid where authority was often and quickly abused and right and wrong were not always clear. The portrayal of religious characters changed with the times as well. In NES games like Castlevania II and Dragon Quest, priests restored players' health and saved their games; in PlayStation games like Final Fantasy Tactics, priests were scheming politicians, hatching plans to resurrect the Devil. In Japanese RPGs in particular, a frequent archetype became "the evil church," a fantasy religion closely resembling Catholicism that was often in league with the very demons it claimed to oppose.

The ultimate villain in many Japanese games stopped being just the Devil and came to encompass organized religion as well. How did Japanese games go from casting the Devil as an opponent of the church to one of its closest allies? An examination of Japan's relationship with Western religions yields some striking similarities to videogame fiction. In the fifteenth and sixteenth centuries, Europe began to set its sights on the Far East. This region was of particular interest to the Catholics, whose religion was undergoing a revival in Europe at this time after losing ground to the Protestant movement.

A Catholic group called the Jesuits quickly saw Japan as a new land to spread their beliefs, and found a willing ally in Oda Nobunaga, a Japanese lord who was engaged in a campaign to unify Japan's then-warring provinces under his rule. Oda Nobunaga's interest in the Jesuits was more political than spiritual, and their presence benefited him in two ways. First, Buddhisim had gained a great amount of political power and might oppose his bid to conquer Japan. Nobunaga hoped the Christian religion would help weaken it. Secondly, he wanted to open trade relations with the foreigners, and was especially eager to get his hands on a new type of weapon - the gun - that the Europeans had brought with them. Several daimyo, Japanese feudal lords, converted to Catholicism as a means to gain favor with European merchants. Some even had their peasants convert along with them.